Kouyate - My most important goal

Cheikhou Kouyate hailed his spectacular match-winner against Swansea City as his ‘most important’ goal for West Ham United.

The Hammers overcame absent stars and the loss of Michail Antonio to a first-half injury to secure three vital points at an atmospheric London Stadium.

Kouyate’s goal came a minute before half-time and relieved the pressure that had been building after the home side passed up a number of first-half chances, when the Senegal midfielder ended a slick move involving Mark Noble and Manuel Lanzini by belting an unstoppable low shot past Lukasz Fabianski.

“This victory is very important for the team because we have had a few difficult weeks and now this victory is good for the fans, for the players and for the staff,” said Kouyate. “This is my most important goal for West Ham and this goal came in a good moment, but the really important thing today was not the goal, but the three points. We must continue to focus and work hard.

“There was big, big pressure because the team needed to win this game. Swansea had one chance to score late on, but Sam Byram was there to save the team, so we can go to Sunderland next week and fight for some points and go for the win.”

This victory is very important for the team because we have had a few difficult weeks and now this victory is good for the fans, for the players and for the staff 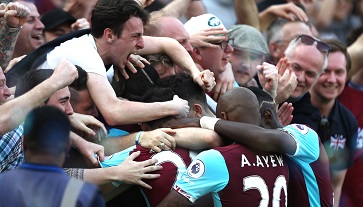 Victory over Swansea ended a run of five straight defeats and came courtesy of a first clean sheet in eleven Premier League matches.

With the Hammers slipping from ninth to 15th in the table over the same period, and sitting just five points above Paul Clement’s team at kick-off, there was plenty of pressure on the hosts at kick-off.

However, Bilic’s players withstood that pressure, worked their socks off and collected three points that moved them up a place and nearer to safety.

“We have this in our team, you know,” Kouyate said. “Last year was unbelievable, but this year has not been a good year, we know.

“We needed to keep our focus and keep working hard and we knew one day it would turn for West Ham and now we have got three points that were very important for the team.

“The Premier League is not easy. Every game is hard and we have a lot of injuries. We have worked hard and now we need to focus on the next games we have got coming up.”

Kouyate’s match-winner was met with huge celebrations around London Stadium, none more so than among the fans who pulled him into the stand for a celebration that saw him booked, and on the bench, where manager Bilic showed his sheer passion by dropping to his knees and clenching both fists.

“After I scored, I went left and I went right [in my celebration] because this goal was very important to me, and you could see I took a yellow card because I went to the fans and one of them took my head!” laughed the No8. “But this is good, because we are West Ham!

“We now have six games to go and now we will go for as many points as we can. We will take it game by game and we will see where we get too afterwards.

“I like Slaven. He said to me this week ‘I like you Cheikhou, do you like me?’ and I said ‘Of course I like you!”. I like the boss because this guy is unbelievable, he works hard for the team and for the players and this victory is good for him.”