Slaven Bilic felt Everton’s ability to be ‘more lethal with their chances was the difference in West Ham United’s 2-0 Premier League defeat at Everton.

The Hammers saw their three-match winning streak ended at Goodison Park, where second-half goals from Romelu Lukaku and Ross Barkley settled what had been a closely-fought game.

Both teams created plenty of chances to score, in truth, but for the visitors Pedro Obiang, Michail Antonio, Manuel Lanzini, Mark Noble and Dimitri Payet all either failed to hit the target or found Toffees goalkeeper Joel Robles in fine form.

At the other end, Adrian produced a stunning save to deny Barkley in the opening half, but he was powerless to prevent Lukaku scoring his ninth goal in nine games against West Ham five minutes after the break.

With the Hammers committing more and more men forward, Lukaku then ran in behind before crossing for the unmarked Barkley to settle matters 14 minutes from full-time.

“I have the feeling that, while you are always not happy after a defeat, I am more disappointed today because we could have taken something from this game,” Bilic reflected.

“I’m not saying that they didn’t deserve it, because at the end of the day they were more mature when the game was on the line, but we should have done better with the start we had.

“In the first few minutes we were much better than them and we should have built on that. Then they came back in the second part of the first half with their aggression to get to the second balls, and they created a great chance for Barkley and that was a massive save from Adrian.

“With the first goal, I’m really disappointed because we gave a cheap goal away. It was cheap because we had the chance to clear the ball, we waited too long and Bolasie committed himself to the tackle and fortunately it went to Lukaku.

“After that, we had a couple of chances to equalise but they were always dangerous on the counter-attack and they scored the second one.

“It’s a big disappointment because I thought we would take something.” 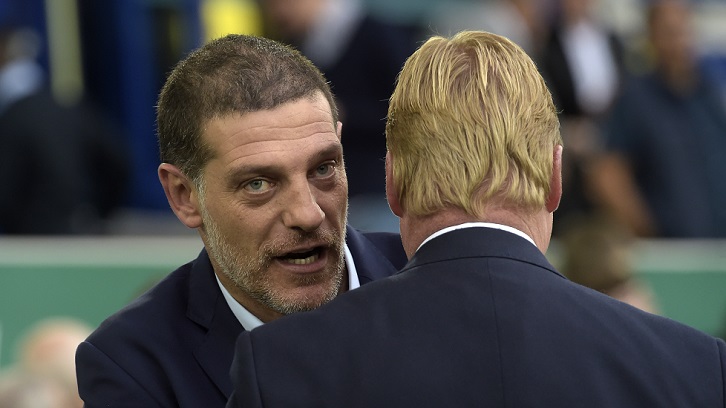 While defeat leaves West Ham looking over their shoulders ahead of a difficult-looking November, the manager is not about to panic.

“We didn’t go high-flying after the three wins, and likewise we’re not going to drop after one defeat,” he said. “We showed some good football, but I’m big-time disappointed because I expected us to create some situations.

“When we offered them opportunities, they took them. They offered us chances in the first half and even in the second after they went one-nil up, but we had to penetrate better.

"They were more lethal and more cruel when they were offered something from us. We didn't capitalise on our chances."

When asked for his assessment of West Ham’s nemesis Lukaku, the former Croatia defender could not hide his admiration for the Belgium forward, who came into his own in the closing stages of Sunday’s game, pulling the visiting defence all over the place forcing Adrian into a fine late save.

“Lukaku is a world-class player,” said Bilic. “On one hand it’s a pleasure to see him live when the game is open – his pace, strength, physique and the plan in his head – but when we were tight in the first half, we coped with him really good. Of course he’s a world-class players and he seems to always do it against us!"