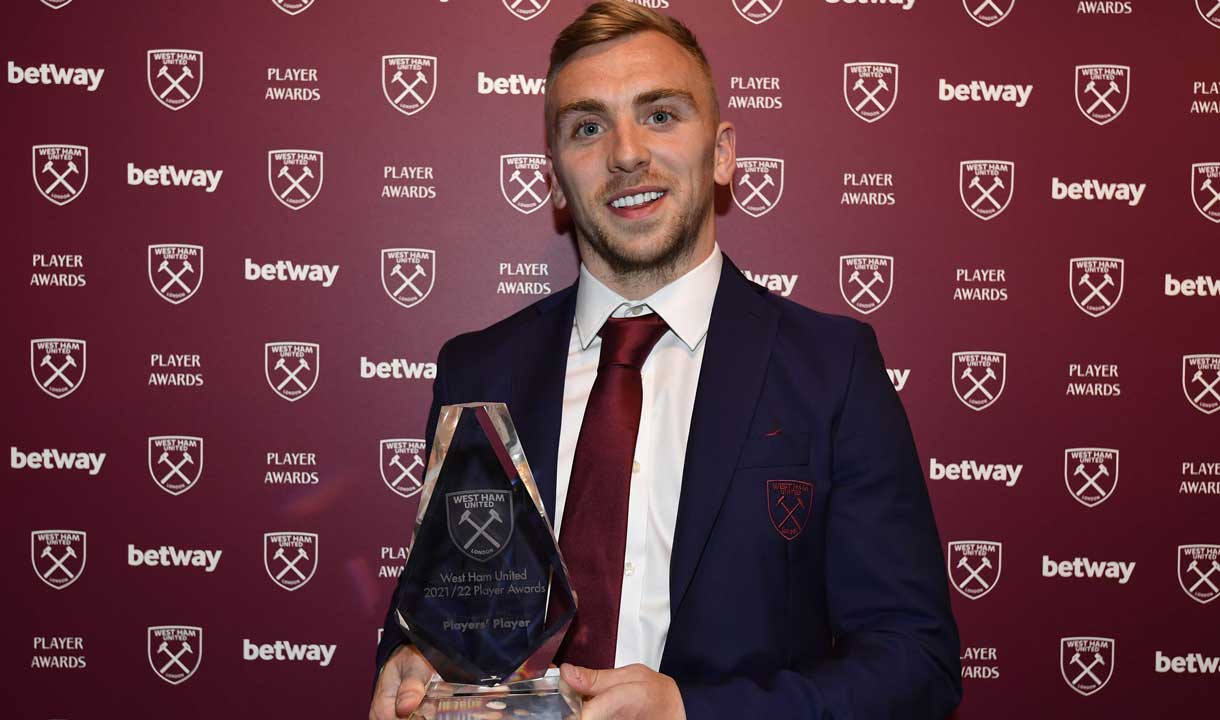 Declan Rice took home the prestigious Betway Hammer of the Year award for the second time on Monday – but he wasn’t the only West Ham United player honoured on a memorable evening at London’s Grosvenor House hotel.

Here we round-up who collected the trophies on an awards night when we celebrated the successes of a special 2021/22 campaign.

Jarrod Bowen currently leads the race for the Top Goalscorer prize with 16 strikes to Michail Antonio's 12 in all competitions.

In Jarrod Bowen’s own words, the 2021/22 season has been his best so far. The versatile forward opened his scoring for the campaign at home to Brentford in October and has not looked back since.

The 25-year-old netted vital finishes in big wins over the likes of Chelsea, Watford and Norwich City in the Premier League, and played a crucial role in ensuring victory over Olympique Lyonnais in the UEFA Europa League quarter-finals, scoring in both the home and away legs.

It was Bowen who took the vote of his teammates to be named Players’ Player of the Year.

The No20's contribution hasn’t only just come in his goalscoring. He has been just as prolific in laying on goals for his fellow Hammers.

With 16 goals to his name across the Premier League, UEFA Europa League, FA Cup and Carabao Cup, he has also registered 13 assists to total a remarkable 29 goal involvements.

Indeed, with two assists against Norwich City on Sunday, Bowen became only the second Hammer to record double figures in terms of Premier League goals and assists in the same season, after Paolo di Canio in 1999/00.

Bowen has played a vital role in his team pushing for a second successive European campaign, along with reaching this season’s Europa League semi-finals – and that impact has been recognised by his fellow pros.

There were a whole host of goals in contention for this prize, but in the end there was a clear winner.

A surging run by Declan Rice left the Crystal Palace midfield trailing in his wake before the slotted the ball square for Manuel Lanzini 18 yards from goal. The No10 took a touch on his right foot before rifling a rising left-footed drive high beyond Eagles stopper Vicente Guaita, doubling his team's lead in the eventual 3-2 win.

It gives Lanzini a second successive Goal of the Season prize, after he won it last season for his spectacular late equaliser at Tottenham Hotspur.

When Moroccan striker Youssef En-Nesyri smashed a rising shot towards the Hammers’ goal midway through the first half, it was Alphonse Areola’s reaction save that kept his team in the tie and set the foundation for an unforgettable come-from-behind victory.

It was a spectacular save and one which took your vote as the best of the season.

Having held their opponents to a 1-1 draw at London Stadium, despite playing the entire second half with ten men, West Ham United produced a sensational performance in France, where two goals just before half-time from Craig Dawson and Rice - and one just after from Bowen - powered the Hammers into the UEFA Europa League semi-finals.

It was a performance for the ages, and one which took your vote for this trophy.

The entire team was honoured for our stunning display to defeat Lyon in the Europa League quarter-finals, but one performance stood out from all the others.

Dawson’s cult-hero status rose to a new level with this outstanding all-round performance in France.

Not only did the centre-back block an incredible six shots and make six clearances, but he capped a dominant display with the near-post header from Pablo Fornals’ corner that set the Hammers on their way to victory.

Launched in November 2018, the Players’ Project is the most ambitious and integrated community programme ever created by a Premier League Club.

At the helm of this has been Mark Noble, a true leader on and off the pitch. It’s not the first time the Club Captain has won this award but this season, his last on the pitch, it means more than ever.

Mark has been involved in a vast number of Players’ Project activities and has embraced his role, not only as an inspiration to countless individuals and groups across our community and beyond but as someone who the rest of the squad and community often look to, to follow his example.

As our longest-serving player, our Club Captain has continuously shown integrity, care and support for the community. He has led Players’ Project efforts and given particular time to the Poverty strand, while also showing support for other key areas.

He whole-heartedly understands the positive impact of the Players’ Project and through his own approach helps to ensure others understand it too. Although the Players’ Project was born less than four years ago, community is in the Club’s DNA and as our community continues to try to recover and rebuild due to the pandemic, Mark remains a fantastic advocate for our campaign to keep making as big a difference as possible.

Ben Johnson has continued his own progression, making a career-high 32 first-team appearances so far this season – including 18 in the Premier League and eight in the UEFA Europa League.

The 22-year-old also netted the second Premier League goal of his career; a well-taken finish in a 4-1 away win at Aston Villa in October. Johnson would pass 50 senior West Ham outings in March and earned his first England U21s call-up and appearance later that month in a 3-0 win away to Albania.

In winning the Young Hammer of the Year Award, which was announced at the Player Awards as being named in the honour of Club captain Mark Noble in his final season as a West Ham player, Johnson has claimed the accolade for a second consecutive campaign.

Sonny Perkins has enjoyed an excellent campaign in Claret and Blue, starting the season in the West Ham United U18s and progressing into the development team, before making his senior side debut away to Rapid Vienna in the UEFA Europa League group stages in November.

The 18-year-old scored 13 goals in 27 appearances at U23s level this season, as well as netting four goals – including an opening-day hat-trick – in five games for the U18s.