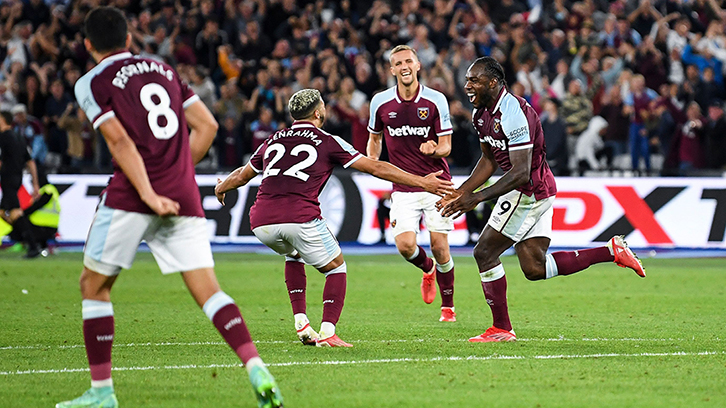 There had been plenty for the Claret and Blue Army to enjoy before kick-off, too, with the presentation of the Hammer of the Year award to Tomáš Souček, an interview with 2012 Championship Play-Off final match-winner Ricardo Vaz Tê and a stunning light and music show.

The Leicester players were welcomed with playful boos before Declan Rice led West Ham out of the tunnel to what was surely the loudest rendition of ‘Bubbles’ heard in the five-plus seasons London Stadium has been our home.

The two teams took the knee to applause before another loud roar of encouragement signalled for Souček to kick-off, with the Irons unusually shooting towards the Sir Trevor Brooking Stand in the opening 45 minutes. 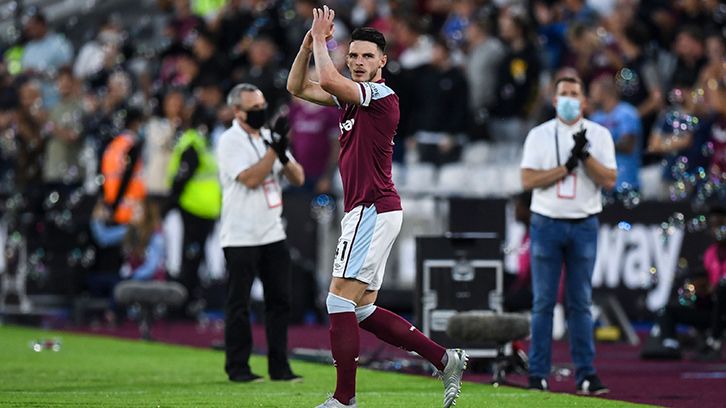 No matter. West Ham were the better team throughout, with Antonio’s outstanding centre-forward play providing a platform on which the Hammers could build attack after attack.

The first chance took under six minutes to arrive and it fell to the in-form Saïd Benrahma. Rice drove at the Leicester defence before exchanging passes with Pablo Fornals. The Spaniard laid the ball back and Benrahma’s curler was gathered by Kasper Schmeichel.

The second fell to Rice himself when Vladimír Coufal’s cross was prodded out to him by Ricardo Pereira, but the captain’s 25-yarder flew comfortably over Schmeichel’s crossbar.

And the third went to Antonio, seeking a Club-record 47th Premier League goal, as burst clear of Wilfred Ndidi but sliced wide from just outside the penalty area.

On 26 minutes, the opener West Ham so richly deserved arrived, and it was a thing of beauty.

Rice dispossessed Jamie Vardy and found Jarrod Bowen. The winger passed into Fornals, who put the ball into Benrahma’s path on the left edge of the penalty area. The Algerian did not need to break stride as he crossed and it was Fornals who converted with an inch-perfect, first-time, left-foot half-volley that bounced in off the far post. 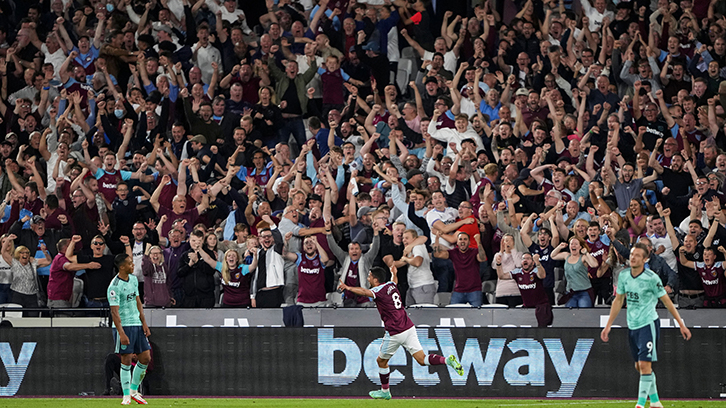 In the stands, 541 days of absence were forgotten as the Claret and Blue Army erupted. And they so nearly had a second to celebrate before half-time, but Souček headed Fornals’ cross past the post, before Ogbonna did likewise from Bowen’s inswinging corner.

Leicester’s task got even harder six minutes before the break when they were reduced to ten men. Ayoze Pérez initially escaped punishment after catching Fornals high on the calf, but Michael Oliver decided he had no option but to send the Spaniard off after being told to look at the pitchside screen by VAR Darren England.

When the half-time whistle was blown, Leicester had been outshot 9-2 and failed to muster a single effort on target.

With a man advantage, West Ham kept the pressure on after the interval, with another incisive attack ending with Souček toe-poking over the top five minutes in.

A second goal seemed only a matter of time and it duly arrived on 56 minutes when Antonio latched onto Çağlar Söyüncü’s errant backpass, picked out Benrahma and he gleefully smashed into the net from 16 yards out.

For a second time, London Stadium erupted, elated to witness the Algerian wizard’s first home goal in Claret and Blue. 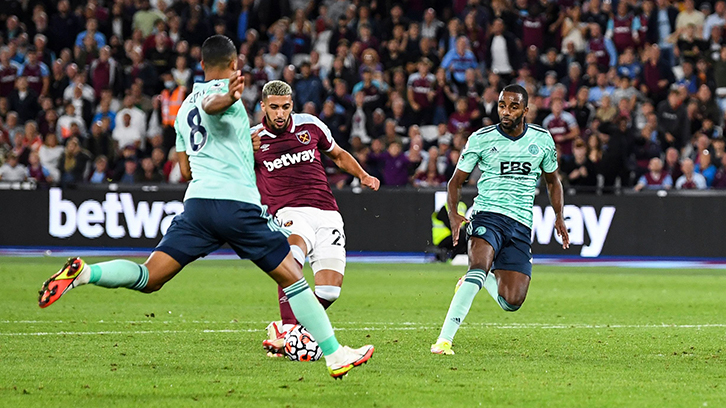 It was one-way traffic now and it took a sensational stop from Schmeichel low to his right to initially prevent Antonio from netting his record-setting goal for the Club, with Aaron Cresswell volleying narrowly over from the resulting corner.

Just when it looked like Moyes’ men were cruising to a comfortable home win, however, there was a sting in the tail as Belgian Youri Tielemans stabbed a low shot past Łukasz Fabiański after his initial effort had been blocked by Cresswell.

Undeterred, West Ham went on a hunt for a third goal of their own and, after Craig Dawson’s header flashed wide, Antonio’s big, record-breaking moment arrived in trademark style.

The No9 controlled Rice’s low ball in, held off Söyüncü and hammered a low shot past Schmeichel, before celebrating as only he could by holding a cardboard cut-out of himself high above his head!

And there was still time for the 31-year-old to grab his second of the night, controlling Coufal’s centre before prodding into the corner to send West Ham top of the Premier League for the first time since 22 August 2006. 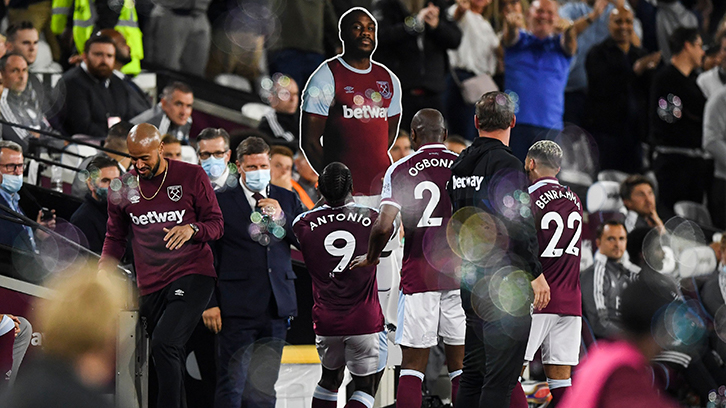