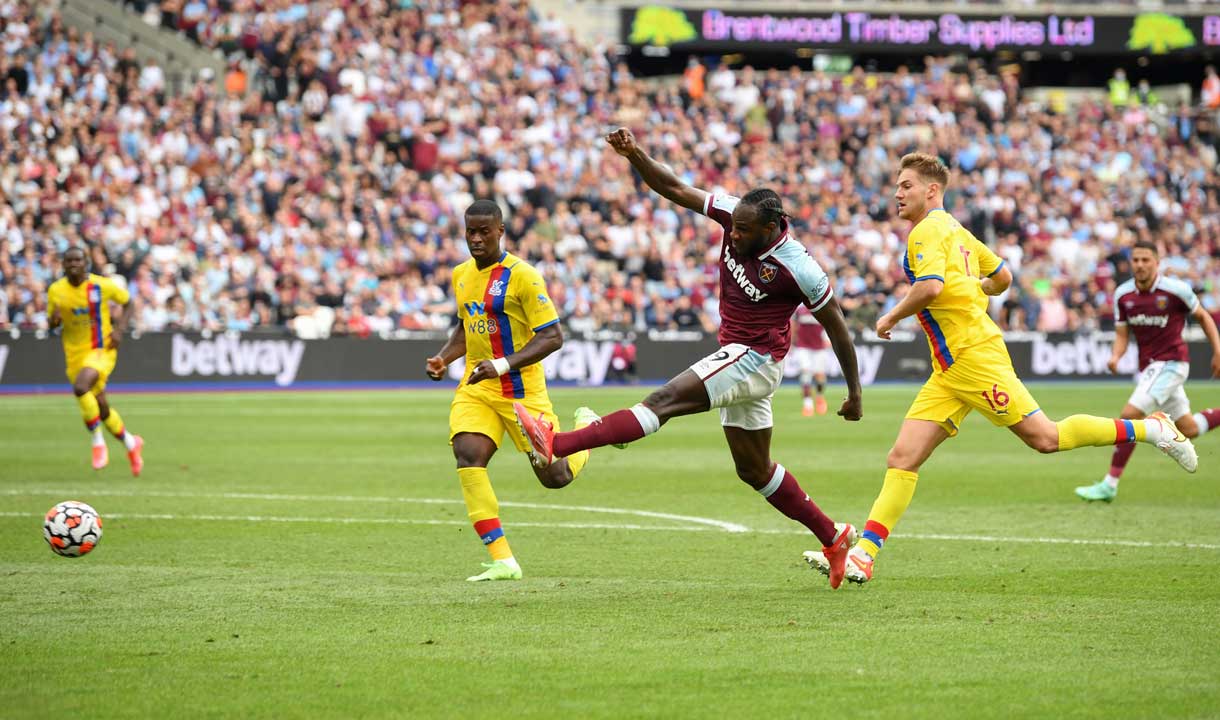 West Ham United maintained their unbeaten start to the season but were twice pegged back in a 2-2 draw against Crystal Palace at London Stadium.

The Hammers struck first through Pablo Fornals shortly before the break, and although Conor Gallagher levelled for the visitors on 58 minutes, Michail Antonio’s fourth goal of the season ten minutes later had home fans dreaming of a third straight win.

However, Gallagher had other ideas, scoring his second goal of the afternoon just two minutes later and ensuring the spoils would be shared in East London.

David Moyes named an unchanged team for the third consecutive Premier League game as his side sought to maintain their perfect start to the season, and while the opening period was a tighter affair than Monday’s romp against Leicester, the Hammers still looked the more dangerous side.

The closest they came in the first half was courtesy of a Crystal Palace header - Joachim Andersen, in challenging Michail Antonio for a cross and diverting the ball towards his own goal, needed the sliding Joel Ward to spare his blushes on the line - but West Ham remained on top without creating too many clear opportunities.

Indeed, the hosts led the shot count by eight to one at the break, and although seven of those eight efforts were blocked by a sturdy Eagles backline, the one that got through really counted.

It was a lovely move which unlocked the visitors’ defence 39 minutes in, too.  Vladimír Coufal hooked a pass into Saïd Benrahma in midfield, and once the Algerian controlled and turned, the Hammers were in business.

His slide-rule pass sent Michail Antonio clear, and although the No9 was forced wide by Joel Ward, he checked back and passed to Fornals, who was arriving at the edge of the box. He immediately shifted possession back to Antonio and continued his run to meet the return pass and knock into an empty net, with goalkeeper Vicente Guaita drawn to Antonio.

It was the kind of intricate, flowing move the Hammers are capable of, and just what was needed to break the south Londoners down and send West Ham into the interval with the lead.

The Hammers created the first opening of the second half too, when Jarrod Bowen controlled a pass forward on his chest in the right channel and released Benrahma inside the area. The angle was against the No22 though, and goalkeeper Guaita got down sharply to make the save.

West Ham were hit with a sucker punch on 58 minutes though, when Palace equalised with their first shot on target of the afternoon.

Gallagher was the goalscorer, forcing home from close range after Christian Benteke stretched at the back post to keep a deep cross alive and nod back into the danger area.

The Hammers picked themselves up, and after a bitty period in the game, restored their lead midway through the half.

Man-of-the-moment Antonio was there to fire home his fourth goal of the season, doing well to hold off Andersen - who headed the ball against the back of the No9's head - and advancing into the area before blasting home left-footed beyond Guaita.

However, the lead would only last a matter of moments as Gallagher hit back with his second of the afternoon 20 minutes from time.

The Palace midfielder controlled James McArthur’s ball into the area and just outside the six-yard box, showed neat feet to turn Craig Dawson and slam into the net.

West Ham introduced Manuel Lanzini and Andriy Yarmolenko from the bench as they searched for a third goal, but in the end they had to settle for a point as a bright game fizzled out in its closing stages.