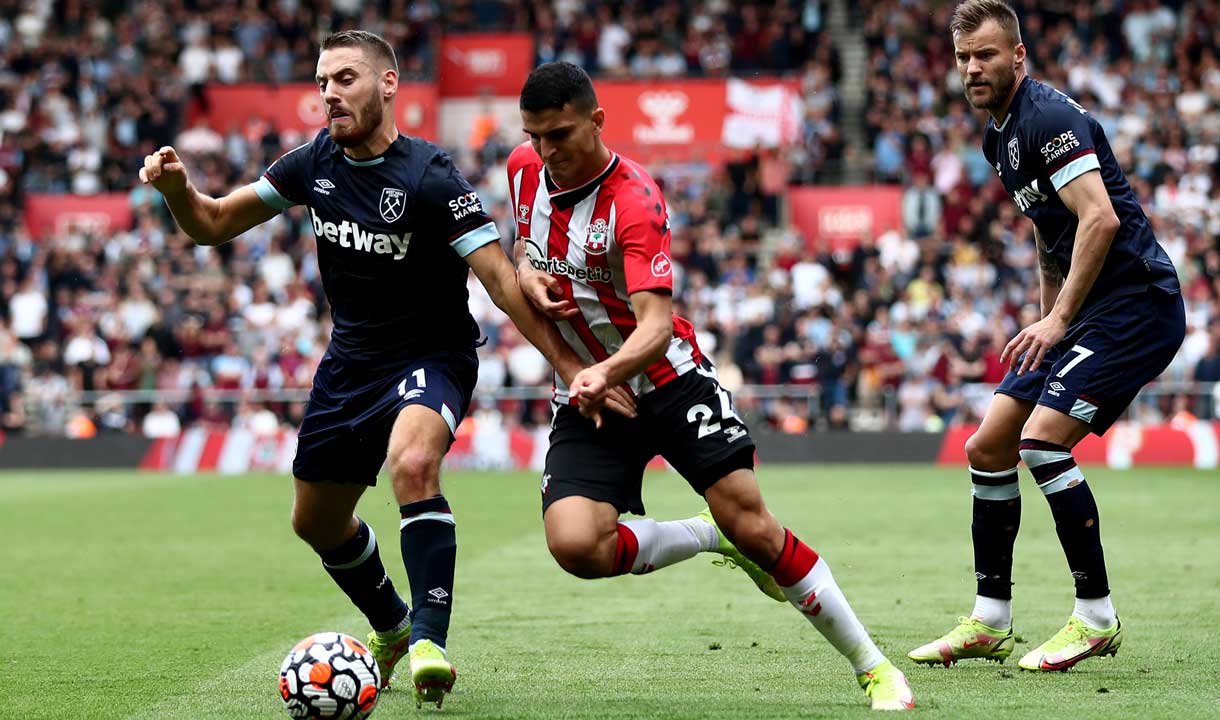 West Ham United’s unbeaten start to the 2021/22 season continued with a 0-0 draw at Southampton on Saturday.

Neither team could find a way through on the South Coast, with both enjoying spells when they were on the front foot, but a point was probably fair in the end.

After Michail Antonio and Jarrod Bowen brought second half saves from Alex McCarthy, the Saints did end the stronger though with substitute Armando Broja twice going desperately close.

He first hit the post from outside the box, then had a header cleared off the line by Declan Rice, while Antonio was dismissed for picking up his second yellow card right at the end.

David Moyes named an unchanged team for the fourth Premier League game in succession, with his trio of new signings Kurt Zouma, Alex Král and Nikola Vlašić named on the bench.

Southampton made a sprightly start to the contest and Adam Armstrong tested Łukasz Fabiański’s handling with a low shot in the fourth minute. The right-footed effort was from an angle, though, and always directed too close to the stopper to seriously trouble him.

West Ham took a little while to get their foot on the ball and establish a degree of control, but midway through the half they began to push Southampton deeper while retaining possession well.

They didn’t create the chances to match that before the break, though, with a Bowen effort from 20 yards in the 31st minute, which was deflected behind, the closest they came.

In truth, genuine openings were very much at a premium in the opening period and Antonio looked to change that at the start of the second, making a strong run to support Saïd Benrahma on a quick break and draw a smart stop down by his near post from McCarthy.

With 51 minutes on the clock, Tomáš Souček rose well when Jarrod Bowen delivered a corner from the right, but couldn’t make the required contact on the header, as the ball slid away from Angelo Ogbonna at the far post too.

Midway through the half Bowen went close to breaking the deadlock, seizing upon a bouncing ball inside the Southampton box to swivel and volley goalwards, but McCarthy showed sharp reflexes to thrust up an arm and touch over.

Then, with nine minutes left to play, Southampton came closest of all, substitute Broja spinning away from Craig Dawson and running at Ogbonna, carrying the ball to the edge of the box before letting fly from 20 yards and striking the base or Fabiański’s far post.

In stoppage time, Broja was denied for a second time, getting his head to James Ward-Prowse’s inswinging corner, but seeing Rice clear off the line, just in time.

With Southampton finishing strongly, West Ham were probably happier with their point, but their afternoon ended on a frustrating note when Antonio picked up his second yellow card in the fifth of five added minutes, for a foul on Moussa Djenepo. It was unfortunate for the No9, who was stretching to retrieve the loose ball after battling with Mohammed Salisu, but the visitors could had few complaints over referee David Coote’s decision.