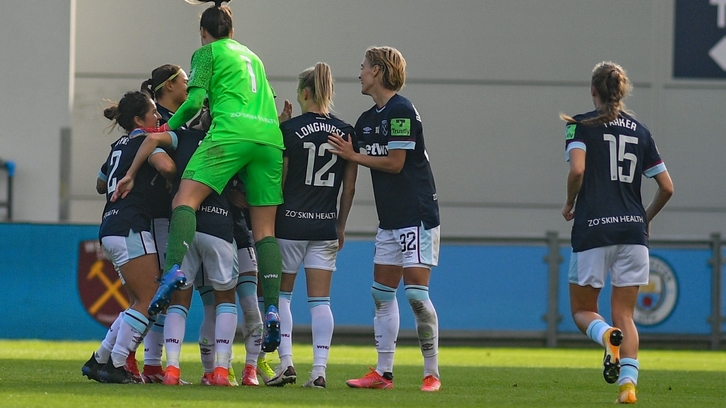 A first half header from Dagny Brynjarsdottir gave the Hammers the lead before an exquisite lob from Yui Hasegawa doubled the advantage deep into added time.

An exceptionally hard-working defensive performance saw Olli Harder’s side reap the rewards, with Mackenzie Arnold in inspired form in the Irons goal throughout.

Back-to-back wins for the first time under Harder sees West Ham United jump up to 4th in the WSL table.

Women’s Manager Olli Harder elected to make two changes to the team that beat Leicester City 4-0 last week, with Zaneta Wyne and Katarina Svitkova returning to the starting eleven in Manchester, whilst Adriana Leon and Lucy Parker dropped to the bench.

The hosts made a bright start at the Academy Stadium, with Lauren Hemp looking the most likely outlet for the Citizens in the early exchanges.

Not to be overawed, the Hammers were content to let their opposition enjoy most of the possession early on, remaining compact, difficult to play through and looking to threaten on the counter.

Manchester City forced their first real opening of the game after just ten minutes. Positive play down the right-hand side from Janine Beckie saw the winger skip past Zaneta Wyne and fire a low cross across the six-yard box, but there was nobody on hand to apply the finishing touch and Gilly Flaherty was able to scramble clear.

As the half wore on Harder’s side grew in confidence and were able to push further up the pitch, putting the hosts on the backfoot.

Shortly before the half hour mark the Hammers carved out their first big chance of the contest. Dagny Brynjarsdottir picked up the ball and drove towards the by-line on the left side, the Icelandic international clipped an inch-perfect cross into the path of Claudia Walker but the No9 saw her effort blocked by a City defender.

The astute defensive display from Olli Harder’s side was clearly beginning to frustrate the Cityzens as the half wore on, muted penalty appeals were waved away by the referee after a coming together between Kate Longhurst and Jess Park in the box as the Irons continued to stand firm.

The game quickly sprung into life as half-time approached. First a poor pass from Hammers skipper Flaherty was intercepted by the lively Hemp, with the winger’s driven effort saved superbly by the outstretched leg of Arnold.

At the other end, it was West Ham United’s turn to seize the momentum and take the lead.

A smart exchange of passes in the midfield saw Yui Hasegawa played into space on the right flank, the summer recruit – with time and space – picked out the advancing Brynjarsdottir at the back post, who calmly headed beyond Taieb to make it 1-0 to West Ham

Manchester City went in search of an immediate response but two smart saves from Mackenzie Arnold from Jess Park and Caroline Weir saw Olli Harder’s side weather the storm and take the lead into the break.

When the two teams re-emerged, it was Manchester City who once more looked to impose themselves as they went in search of an equaliser.

After a string of saves in the opening 45 minutes, Arnold was again called upon in the early stages of the second period, saving well from a stinging Weir effort from just outside the box.

The Cityzens continued to probe after the restart, but it was West Ham United who maintained a real threat on the counter and were arguably unlucky not to double their lead through Tameka Yallop.

An incisive pass from Brynjarsdottir split the Manchester City defence and saw Yallop go one-on-one with Taieb, the Australian international, however, could only fire her effort straight into the palms of the French goalkeeper.

It was a missed opportunity that nearly cost the Hammers dearly as just seconds later Manchester City had the ball in the net.

Substitute Adriana Leon was dispossessed by Hemp in the midfield and the fleet-footed forward drove towards the heart of the Irons defence. Hemp kept her composure and picked out England compatriot Ellen White who finished well into the corner – albeit from an offside position.

A tireless performance from Olli Harder’s side showed little sign of slowing down as the Hammers tracked every run and met every cross under the low sun at the Academy Stadium.

As time wore on, the Cityzens began to throw caution to the wind, forcing West Ham United to drop deeper in the closing stages. The lively Hemp tried her luck from range, but Arnold managed to palm behind as still the hosts failed to find a way through.

Even when Arnold was beaten, the post came to the aid of the Irons goalkeeper. Substitute midfielder Laura Coombs’ thrashed effort bounced back off the upright as the game ticked into added time.

With all eleven players behind the ball and Olli Harder’s side looking to protect their one goal advantage, it was a moment of magic from Hasegawa deep into added time that doubled the Hammers lead.

Cityzens defender Demi Stokes was caught in possession by the Japanese international, who raced through on goal and beat the stranded Taieb with an audacious lob from 30 yards for her first goal for the club.