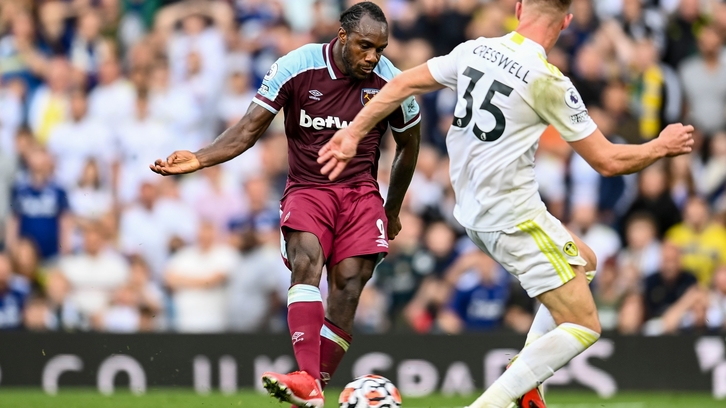 A late Michail Antonio goal propelled West Ham United to a 2-1 victory over Leeds United at Elland Road in the Premier League on Saturday afternoon.

Raphinha’s driven effort gave the hosts the lead after just twenty minutes, but the Hammers hit back through a deflected Jarrod Bowen effort – that was later awarded as an own goal by Junior Firpo - and a 90th minute Antonio winner to claim the three points.

The victory sees David Moyes side climb to seventh in the Premier League table after just six games.

Antonio returned to the Hammers starting line-up after missing last weekend's league game against Manchester United due to suspension, before being rested for the midweek cup game against the same opposition.

David Moyes made ten changes in total from the team that won at Old Trafford in the Carabao Cup, with only Jarrod Bowen retaining his place.

Leeds United were forced into making two changes from the side that drew with Newcastle United in their last Premier League outing a week ago. Charlie Cresswell and Jamie Shackleton deputising for injured duo Patrick Bamford and Luke Ayling.

The Hammers made a positive start in Yorkshire, roared on by the travelling Claret and Blue Army. A smart exchange of passes, moments into the contest, saw Saïd Benrahma pick-up the ball in space, the Algerian jinked inside Stuart Dallas and let fly towards Meslier’s near post, but the ball drifted narrowly wide.

The bright start for David Moyes side continued as Fornals and Bowen combined well on the edge of the Leeds box, before the former slid the ball through to Antonio, the No9 looked well placed to open the scoring yet found himself denied by the fingertips of a sprawled Meslier.

Meslier was much the busier of the two goalkeepers in the early stages with Benrahma next to draw an acrobatic save from the Frenchman. A marauding run down the left-hand side from Antonio saw the forward lay the ball off to Benrahma on the edge of the ‘D’, the fleet-footed winger whipped his effort towards the far post, but the goalkeeper was equal to it.

The breathless nature of the contest showed no signs of slowing down as Dallas was next to try his luck, the full-back's stinging drive pushed over the bar by Fabiański as the momentum shifted towards the home side.

Momentum that was duly rewarded in the 19th minute as Raphinha gave Leeds the lead, after Souček was caught in possession. The Czech midfielder had his pocket picked by Rodrigo on the halfway line and the forward set off towards the box at a canter. The Spaniard then calmly laid the ball into the path of Matheus Klich, who, in turn, squared to the advancing Raphinha to fire past Fabiański for his third goal of the season.

The opening goal of the contest undoubtedly spurred the hosts forward, but David Moyes' side remained a threat on the counter. An intuitive bit of thinking from a free-kick led to Benrahma releasing Fornals in the box, the No8 squirmed past a challenge and picked out Jarrod Bowen who was just knocked off balance as he looked to shoot, and the ball trickled behind.

Raphinha, however, was a constant thorn in the side of the Irons backline and nearly doubled Leeds advantage just after the half hour mark. Dallas intercepted the ball on the halfway-line and sprung a counter-attack after a spell of Hammers possession. The former Brentford man shifted the ball inside to Raphinha, who attempted to curl the ball past Fabiański only for the post to come to the aid of the Hammers defence.

West Ham United continued to look for a way back into the game – and nearly found one - as half-time approached. Benrahma, enjoying a lively opening 45 minutes, put in a teasing cross from the left that was just out of reach of a sliding Kurt Zouma at the back post.

Seconds before the break the Hammers would spurn a huge chance to get themselves level. Positive play from Michail Antonio in midfield saw the striker play an incisive through ball to Pablo Fornals, who was left with only Meslier to beat. The Spaniard surged down on goal, but the ball slightly ran away from the attacking midfielder, helping Meslier close the angle and save well from close-range.

When the two teams re-emerged at Elland Road, it was the Hammers who continued to ask the more probing questions and for the first time on Saturday afternoon, had the ball in the net.

A deep free-kick from Aaron Cresswell looped up off a Leeds defender and fell between a charging Antonio and Meslier in the Leeds goal. The goalkeeper spilled the initial catch into the path of Souček who duly prodded home only to see the goal disallowed by VAR for a foul on the goalkeeper after a lengthy stoppage.

The back-and-forth nature of the game showed little sign of relenting in the second period, and it was the hosts who were next to go close. More good play from Raphinha saw the winger get to the by-line down the right and cuts back for the Klich on the penalty spot. The Leeds midfielder looked set to double the lead, only for Coufal to produce an important block on the shot to steer it behind.

At the other end of the pitch, Coufal was in the middle of the action again as West Ham United found a deserved equaliser.

The defender picked up the ball and found Bowen in plenty of space in the right channel. The wide-man quickly shifted the ball onto his left foot inside the area and fired goalwards. The ball deflected off two Leeds defenders and flew beyond Meslier into the net to make it 1-1.

Despite the goal being all Bowen’s making it was a telling deflection from Firpo who was given the own goal in the aftermath.

Following the leveller, it was certainly Moyes' side in the ascendancy as they went in search of a potential winner at Elland Road.

In similar circumstance to the disallowed goal, Meslier was again caught out under the high ball from a Cresswell free kick. The goalkeeper, challenging with Souček, could only watch as the ball dropped to the feet of Antonio, but his blushes were spared as the forward could only lift the ball over the bar.

It was to be Antonio who would have the last laugh, however, as the clock ticked over into injury time.

Superb work from Declan Rice in the midfield led to Antonio being put through on goal, the experienced No9 rode the challenge of Leeds defender, kept his cool, and calmly stroked past Meslier for his fifth goal of the season.

A determined defensive effort through six minutes of additional time followed, but the Hammers withstood the test to record their second successive 2-1 win at Elland Road and more importantly another three points in the Premier League.