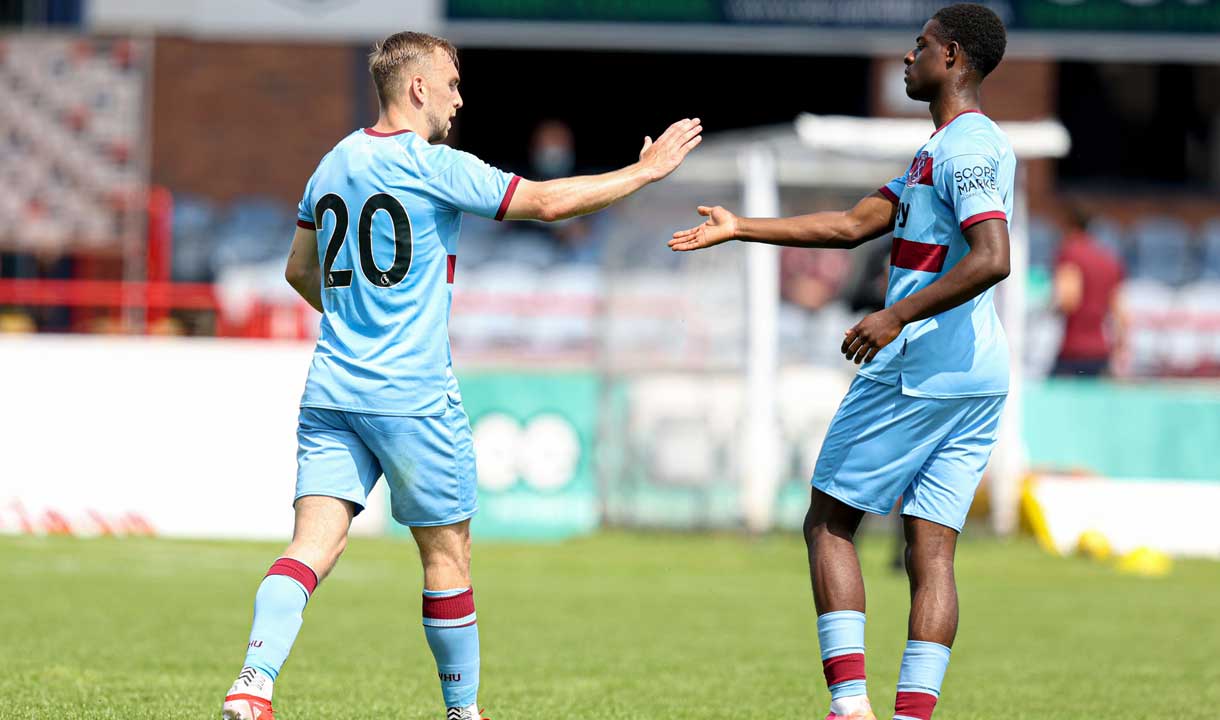 West Ham United came from 2-0 down to earn a share of the spoils in their first pre-season match of the summer at Dundee on Friday.

The Scottish Premiership side looked set to claim the Hammers’ scalp when they led 2-0 thanks to goals at the start of each half from Charlie Adam and Paul McMullan.

But West Ham came roaring back and a quickfire double from Jamal Baptiste and Jarrod Bowen ensured their week-long training camp in St Andrews would end on a positive note.

With the Hammers’ international players yet to return to pre-season, David Moyes had a blend of youth and experience at his disposal at the Kilmac Stadium.

Dundee are only four days out from the start of their season, with the Scottish League Cup campaign getting underway on Tuesday, so perhaps it was little surprise that they made the sharper start.

The home side buzzed around with purpose early on, and their reward was the opening goal with 14 minutes on the clock.

Declan McDaid delivered a dangerous corner from the left-hand side and Adam got up to send an unstoppable header flying past Nathan Trott in the West Ham goal.

It took a while for the Hammers to grow into the game, but by the midway stage of the first half, they had taken a firm grip on possession and began to create opportunities.

Michail Antonio came close to levelling with 27 minutes on the clock, when Nathan Holland slipped a pass in between centre-half and left-back for Antonio to run onto. Home keeper Adam Legzdins did well to smother the angle, though, and the No30’s clipped shot thudded into his chest.

West Ham were getting into good positions around the Dundee box, with Holland, Manuel Lanzini, Conor Coventry and Bowen linking up impressively, only for the final touch to elude the visitors as they closed in on goal.

Legzdins was required again to preserve his side’s lead in first half stoppage time, though, sticking out a right boot to turn Bowen’s drilled effort away from goal.

West Ham made seven changes at the break, and as the newcomers found their feet Dundee took advantage by adding a second.

McMullan had only just stepped off the bench when, in the 53rd minute, he was allowed to carry the ball to the edge of the area before unleashing a well-placed shot with beat Darren Randolph’s dive to his left.

West Ham wasted little time in getting back into the contest. Bowen drove at the heart of the Dundee backline and was fouled.  His free-kick hit the wall, but the home side’s reprieve was only a momentary one as the corner came into the box and Baptiste powered a header home.

A quickfire second followed as the Hammers hauled themselves back level. This goal owed it all to Bowen, who collected a lofted pass from Baptiste on the right touchline, and drove inside, beating Jordan Marshall’s challenge to advance into the box, where Ryan Sweeney’s clumsy tackle gave the referee a simple decision – penalty to West Ham.

Bowen picked himself up and dispatched an emphatic penalty into the right hand corner, with Legzdins diving the other way.

Xande Silva and McMullan exchanged efforts which missed the target as both teams searched for a winner, but Bowen’s leveller proved to be the final meaningful action as the game ended in a 2-2 draw.