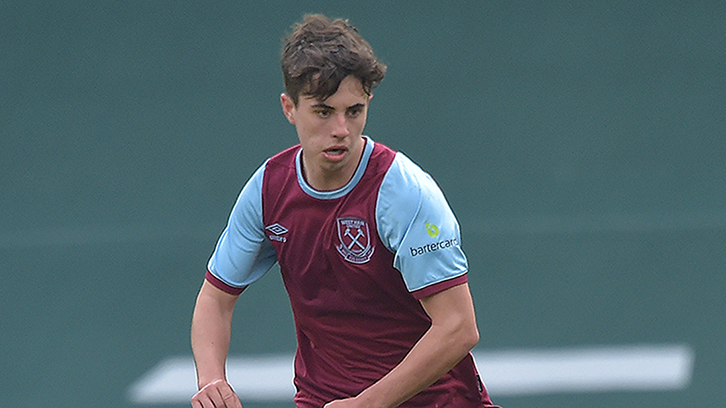 The Hammers were looking to build on Monday’s 5-0 win over Norwich City U18s in the FA Youth Cup with a first victory in U18 Premier League South since November.

Several late concessions had played their part in the young Hammers’ winless run – most notably when an unfortunate last-gasp equaliser denied them at Southampton weeks ago – but on this occasion, it was the Irons who turned the game on its head in the closing stages.

Brandon Cover’s good finish from outside the area midway through the second half had put Leicester on course for victory, but two good strikes in the closing stages from Kai Corbett and Sonny Perkins – within a minute of one another – gave West Ham a richly deserved three points.

The win also marked a big occasion for two starting players in particular: Laurence Shala, the U16s goalkeeper and Kosovo youth international making his U18s debut; and forward Amadou Diallo, the England youth winger making his first start in Claret and Blue since November having returned from a knee injury.

Evidently buoyed by their result earlier in the week, the Hammers made a bright start in east London against Leicester, with plenty of creativity on show in the early stages.

A number of chances came and went for the boys in Claret and Blue in a dominant first half display, and they could consider themselves highly unfortunate not to lead at the interval.

It looked like West Ham would pay for such spurned opportunities, however, when Leicester – who improved after the break – took the lead with 62 minutes on the clock.

Joe Wormleighton’s in-swinging cross from the right was headed clear by Levi Laing – but only as far as Cover who, on the edge of the box, showed great composure to flick the ball past his man and hit a rising shot into the corner.

Lead coach Kevin Keen responded by introducing some fresh blood from the Hammers’ bench, and, having continued to push forwards, it was a second-half substitute who drew the home team level after 83 minutes.

Corbett – who had recorded a goal and two assists at Carrow Road earlier in the week – showcased excellent technical ability to whip a free-kick from the edge of the ‘D’ around both wall and Foxes’ goalkeeper Arlo Doherty, nestling into the far corner.

The joyful celebrations doubled down within two minutes when Michael Forbes carried the ball over the halfway line and played the ball into playmaker George Earthy’s feet.

The No10 was alive to the opportunity and span to set Isaac Evans down the left on the overlap. His low pull-back found Corbett in space on the penalty spot but – having seen the initial effort blocked, then half-cleared, near the line, Perkins promptly dispatched the loose ball to complete the comeback in style.

The three points push the Irons up to tenth place in the U18 Premier League South table with seven games of the season to go – and a busy April fixture list ahead.

“It was a strange game, but I’m happy we won it in the end,” assistant coach Mark Phillips told whufc.com. “We played very well in the first half – as well as we’ve played this year, with some really good football – but we just couldn’t finish our chances.

“Leicester improved in the second half and they went up and scored. We made a few substitutions, a few changes. We were worried it could be one of those games, but then we scored two very good goals. We’ve had some things go against us recently late on, so it’s nice for it to happen for us this time.

“We spoke about momentum going into the game and the need to keep it going. Obviously, the players are trying to get themselves onto the teamsheet for the next game in the FA Youth Cup and, going forwards, we’ve got regular games – Saturday, Tuesday, Saturday, Tuesday – for them to try and do that.”

As for the FA Youth Cup fifth round, a home tie against Arsenal at Rush Green Stadium beckons.

Phillips concluded: “Arsenal are a tough team. I don’t think they’ll be relishing playing us, so it’s a tough draw for both teams – we both could have had easier fixtures.

“After Monday’s game, we’ll approach it with an air of confidence, but not arrogance. It’s a tough game all round.”

West Ham’s youth team return to U18 Premier League South action when they travel to Fulham U18s on Tuesday lunchtime.