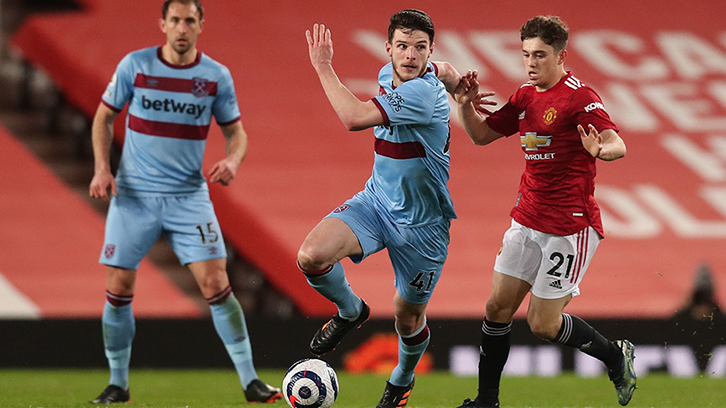 West Ham United could consider themselves unfortunate as a second-half own-goal saw them slip to a 1-0 defeat at Manchester United in the Premier League.

A combative encounter at Old Trafford yielded few clear shooting opportunities for either side, Mason Greenwood going closest before the break when Lukasz Fabianski did superbly to turn his low effort onto the post.

But despite doing well to frustrate their hosts in the first half, the Hammers conceded early in the second after a corner kick flashed off Craig Dawson's head and past Fabianski - enough, in the end, to deny David Moyes' side anything from the game.

Greenwood would later hit Fabianski's post once more as the Irons pushed forwards in search of an equaliser, but the visitors were ultimately unable to produce the clear chance required to draw themselves level.

West Ham made three changes from the side that dispatched Leeds United so clinically on Monday evening, with Club captain Mark Noble – in the same week he announced next season would be his last as Hammer – restored to the starting line-up alongside Jarrod Bowen and Ben Johnson.

Just as they did on the same ground the previous month, Moyes’ men set themselves out in compact shape, seeking to frustrate the hosts and, when the opportunity arose, hit them on the break.

Indeed, a decent shout for a West Ham penalty was dismissed inside the first three minutes when Dawson, attacking a corner, tripped over the crouching Aaron Wan-Bissaka. Referee Martin Atkinson waved away the appeals.

Despite lacking in shooting opportunities, the Hammers still caused their hosts some real consternation in the opening exchanges with their physicality. With just shy of 20 minutes on the clock, Aaron Cresswell swung in a deep cross which flicked off the head of Scott McTominay.

As the ball looped high and began to drop invitingly inside the area, Bowen’s persistence saw him challenge home goalkeeper Dean Henderson, whose poor punch could have dropped anywhere – but, unfortunately, to a red shirt it went.

Manchester United ought to have taken the lead with a quarter of the game gone when Greenwood’s curling cross found Rashford creeping in behind Issa Diop. The Frenchman’s challenge, however, seemed to force the England forward to misdirect his header wide of the far post.

Despite the pressure mounting before half-time, the Irons stood firm, Dawson, Diop and Cresswell clearing a succession of high balls between them - but on the rare occasion on which they were surpassed, West Ham’s defensive trio were indebted to Fabianski for a wondrous fingertip save.

After combining with Bruno Fernandes outside the box just before half-time, it seemed certain Greenwood’s low curling shot would nestle inside the far corner – but West Ham’s No1 had other ideas, sharply plunging to his right to tip it onto the woodwork.

The first half might have ended without West Ham enjoying a shot, but Moyes was surely the happier of the two managers for his side’s defensive diligence.

But the respite proved momentary as Fernandes’ in-swinging corner seven minutes after the restart was challenged for by McTominay at the near post. The cross whistled past the Scot, but continued to travel at pace, deflecting in off the unsighted - and unfortunate - Dawson.

The Hammers were unbowed, going straight back on the offensive. Cresswell’s throw-in was volleyed on by Antonio to Bowen, whose low pass into Tomas Soucek proved half a yard too far for the Czech Republic midfielder to gather in his stride.

The goal forced the game to open up, with Fernandes’ dipping strike from 25 yards well pushed away by Fabianski, moments before Soucek beat Maguire to a hanging Cresswell cross – under heavy pressure, he headed wide.

Moyes subsequently made a double change laced with attacking intent on the hour mark, introducing playmakers Manuel Lanzini and Saïd Benrahma to the fray.

The response was immediate as Bowen twice threatened. The No20 first saw a shot from just inside the area blocked by Maguire, then seconds later headed an in-swinging Cresswell delivery wide of the far stick – albeit from an offside position.

As the match ticked into its final quarter, full-backs Coufal and Cresswell began to see more of the ball in the offensive third, but it was Greenwood who went closest to scoring next, dribbling from the halfway line and smashing a shot - again - against the base of Fabianski's post.

West Ham continued to push up the pitch and a quick exchange of passes led to Benrahma teeing up Soucek inside the area, but his side-footed strike was blocked by Shaw.

That would prove the last clear chance for the visitors to get anything out of another hard-fought encounter at Old Trafford, with attentions in the bid for European football now turning to next Sunday's home game against Arsenal at London Stadium.