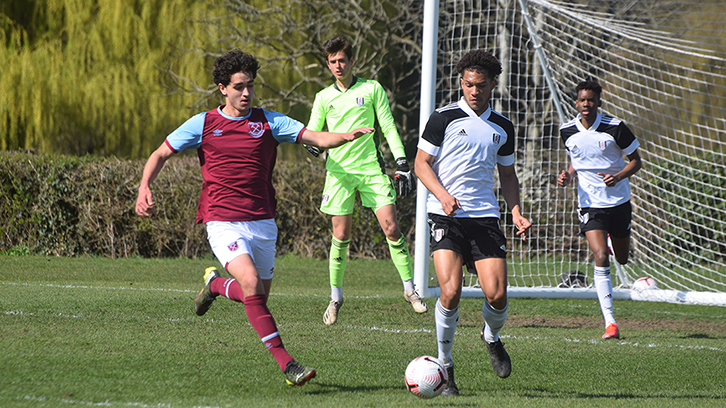 Kevin Keen’s youth team were four games unbeaten in all competitions going into the tie, but could not respond to goals from Jay Stansfield, Kieron Bowie (two) and Mika Biereth either side of half-time.

Coming off back-to-back wins in the FA Youth Cup and league last week, the Hammers made a bright start in the opening minutes at the London School of Economics Sports Ground.

Kai Corbett’s high pressing saw him rob Fulham goalkeeper Alex Berto of the ball – but the custodian responded to the Hammer’s shot with a good low save.

Corbett then came close to picking out Kamarai Swyer with a low ball in, but it was Fulham who took the lead with a quarter-of-an-hour on the block when Jay Stansfield fired in from close range after being picked out by Bowie.

Junior Robinson was the next Hammer to be denied by the legs of Berto, having shot low from the corner of the box, before West Ham goalkeeper Krisztian Hegyi produced a good save of his own to deny Luke Harris’ long-range volley.

Despite being on an even keel, when the next goal arrived, it went to Fulham, Bowie slotting home a loose ball following a scramble at a corner kick.

While West Ham attempted to mount a fightback after the break, the next goal went to the team in white on the hour mark; Biereth ran in behind, controlled a long ball and fired in an effort via the inside of the post. 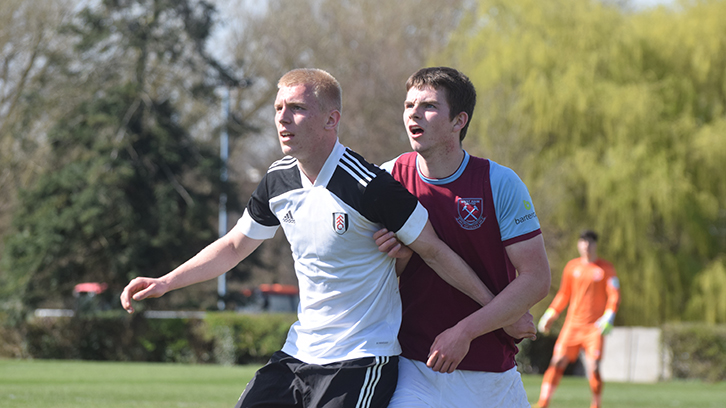 The defeat sees the Irons remain in tenth place in U18 Premier League South.

“It was a tough game,” Keen told whufc.com. “Fulham were better than us and deserved to win today.

“They were more clinical than us. We had a couple of fantastic chances in the first half which we didn’t convert when the score was 0-0 or 0-1, and against a mature, league-leading team, you’re always going to pay for that, and we did.

“They’ve got some very useful players, especially in the attacking areas, but today we didn’t quite handle them as well as we should have done.

“The challenge was to go to the league leaders and give them a game, but unfortunately we weren’t up to it today.”

West Ham’s U18s have a busy month ahead of them in April, with four league games – plus an FA Youth Cup fifth-round tie at home to Arsenal – all to be played.

Their next league game is away at Crystal Palace on Wednesday 7 April, with the players’ next challenge being to recapture the qualities that have defined recent performances.

Keen added: “We have got a busy schedule. In the last three or four games, there have been so many positives.

“It’s a matter of the boys rebounding back to that and making sure that, in the next couple of league games against Crystal Palace and Reading, we get back on track, ready for Arsenal in the FA Youth Cup.”