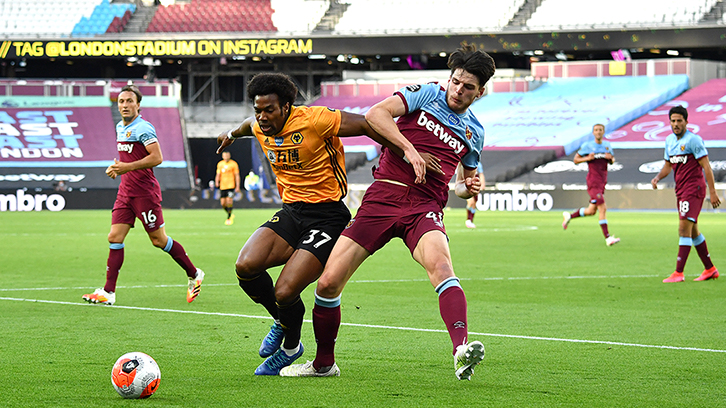 Goals from Raul Jimenez and Pedro Neto condemned West Ham United to defeat against Wolverhampton Wanderers, in their first game since the 2019/20 Premier League season was restarted.

In the unfamiliar surroundings of a behind closed doors match at London Stadium - this being only the second home fixture the Irons have played without fans in their history - late substitutions made the difference in a match where both sides took their time to find their feet again.

Manager David Moyes made two changes to the side which put in an excellent counter-attacking, if ultimately luckless, performance at Arsenal’s Emirates Stadium, their last Premier League outing some 105 days ago.

Angelo Ogbonna and Sebastien Haller made way for Tomas Soucek and Felipe Anderson in the initial eleven, with Soucek coming into midfield and Declan Rice dropping into centre-back – his first start in that position since May 2018.

Perhaps lacking in initial sharpness – understandable, given the length of the enforced break to the season – the early offing saw plenty of exchanges in possession between the two sides, but little by way of clear-cut opportunity.

Wolves perhaps had the better of these moments, working the ball to win several corners, but Moyes’ men were typically resolute in their defending to cut out any clear chances.

It was Pablo Fornals who enjoyed a rare chance in the game early on. The Spaniard timed his run from deep to perfection to meet Mark Noble’s pinpoint long ball over the top – but the Spaniard, perhaps unaware of how much time he had, was unable to control his finish, lashing over.

The Hammers’ next shooting opportunity followed just minutes after, Jeremy Ngakia winning the ball high from Romain Saiss before cutting the ball back for Soucek on the edge of the area. The Czech Republic international’s strike was powerful, rising and goal-bound – but Conor Coady was on hand to bravely divert over the bar with his head.

Lukasz Fabianski would be forced into action by Jimenez and Saiss during the first 45 minutes, but both instances saw the shots lack sting, providing comfortable enough saves for the Hammer of the Year in goal.

After the break, such opportunities continued to prove rare as both sides held firm, with defences limiting strikers to half-chances at best.

With 20 minutes to go, Jarrod Bowen thought he might have won West Ham a penalty, utilising all his pace to run onto a delightful pass from Soucek – but Saiss’ challenge, while bringing him down, reached ball first.

As players from both sides began to tire in the closing stages, both managers looked to their bench for their inspiration.

Unfortunately for the Hammers, it would prove a Nuno Espirito Santo switch which made the difference, Adama Traore making the most of his fresh legs to beat his man on the byline. The winger subsequently whipped an excellent cross onto the head of Jimenez, who could not miss from close range.

West Ham looked to respond straight away, Rice climbing high to meet a Bowen corner at the far post – but Patricio was able to scramble his header round the post. From the subsequent corner, the hosts managed to work the ball to substitute Manuel Lanzini, but the Argentine's acute cross was inches too high for Soucek.

Michail Antonio then came close to a moment of real inspiration, showing quick feet to beat four opponents and curl a superb shot towards the top corner - but his strike whistled just over, hitting only stanchion.

Seconds later, and another Wolves substitute showcased his quality, Pedro Neto being picked out by Doherty at the far post, smashing the ball with exemplary technique into the top corner.

That was the last action of note in a hard-fought but cautious game, ultimately settled by two moments of quality - unfortunately, in this case, not in the Irons' favour.