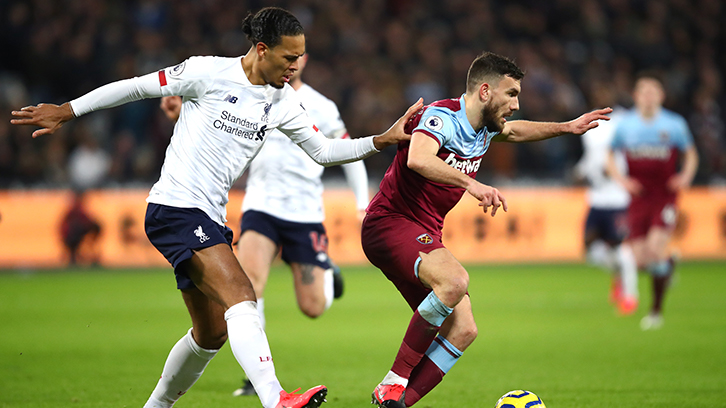 Goals in either half saw West Ham United fall to a 2-0 home defeat to Premier League leaders Liverpool.

Mohamed Salah’s penalty in the 35th minute gave the Reds the lead, while Alex Oxlade-Chamberlain scored on the counter-attack not long after half-time, to send all three points back up to Merseyside with Jurgen Klopp’s side.

For the Hammers, a battling performance yielded few rewards, although David Moyes’ men were not without their chances. Robert Snodgrass and Declan Rice both tested Liverpool’s Alisson with fine efforts, met by equally fine saves.

A chilly evening at London Stadium played host to its second match in four days as league leaders Liverpool visited West Ham, and it was the home side that had the first chance of the fixture.

Robert Snodgrass did well to switch the play, finding Arthur Masuaku. The full-back’s cross was turned agonisingly wide by Manuel Lanzini, although the linesman had already ruled the Argentinian offside.

Debutant Jeremy Ngakia grew into the first half; his pace on the right-flank causing issues. Twice, the 19-year-old played in dangerous looking crosses, although Alisson was equal to both.

Liverpool, for the most part, struggled to pass in between West Ham’s solid defensive line, but a long-ball forward that was collected by Robert Firmino ended up winning the away side a penalty, after Diop was ruled to have fouled Divock Origi.

A quick VAR check confirmed the decision and Salah rolled in the spot-kick.

Captain Mark Noble attempted an audacious volley from 25 yards but Liverpool led at the break, although the Irons could not be too disheartened given the efforts after 45 minutes.

Just four minutes into the second period, West Ham had a huge opportunity to level the contest. A patient build-up of play led to Noble finding Declan Rice on the flank. The midfielder’s low cross was met by Lanzini but bounced off his standing foot, rather than the swinging right, and fell kindly into Alisson’s grasp.

Lukasz Fabianski had to react quickly to deny Roberto Firmino on the counter, but the Poland international could do little to deny Liverpool’s second, scored on the counter-attack. With the outside of his boot, Salah found Oxlade-Chamberlain, who slid home.

Still, West Ham pressed. An error at the back for the away side allowed Lanzini to play in Snodgass, who saw his first-time effort palmed away. A few moments later, Snodgrass turned provider, with Angelo Ogbonna heading over from a set-play.

The introduction of Pablo Fornals added more spark to West Ham’s attack, with the Spaniard leading an offensive that ended with Rice striking powerfully, only to see his attempt go straight at Liverpool’s goalkeeper. Alexander-Arnold would hit his own post, before Salah went close to his second, striking the outside of West Ham’s woodwork.

As time ticked away, Rice thought he had halved the deficit as a looping header looked destined to find the net, only for Alisson’s diving save to deny the midfielder a route back into the match.