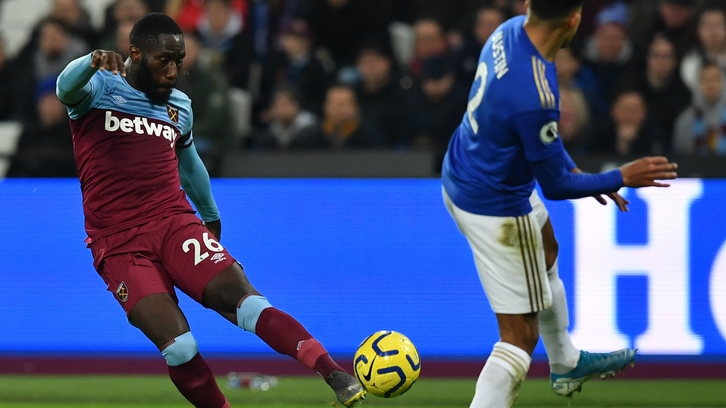 Lukasz Fabianski, returning after a three month absence, gave away a penalty early in the game but redeemed himself immediately by saving Gray's effort, but the Foxes still took the lead through Iheanacho's close-range header.

Pablo Fornals netted his first Premier League goal for the Hammers with a tidy finish to level the match prior to half-time, but Gray's sweeping effort meant West Ham were beaten in the Saturday evening fixture

The returning Fabianski received a huge cheer from the West Ham faithful at London Stadium, and the Poland international was first involved on four minutes when Marc Albrighton powered an effort towards goal from Gray’s cross. The Hammers No1 was equal to the effort.

Sebastien Haller saw his own strong strike blocked by Jonny Evans but the first real drama of the afternoon came before ten minutes had been played, as Fabianski bought down Iheanacho in the penalty area. A yellow card for the ‘keeper and a spot-kick for the Foxes.

Up stepped Gray. His effort was low, but tame, and Fabianski immediately rectified his mistake with a fine save.
Arthur Masuaku was next to try his luck, and a curling effort from 25 yards almost bamboozled Kasper Schmeichel, but the Leicester goalkeeper was able to punch away the full-back’s attempt.

As the final five minutes of the first half approached, Leicester took the lead. Ayoze Perez did well to keep the ball alive, heading back for Iheanacho to knock the ball past Fabianski from close range.

Haller saw a header go agonisingly wide just moments later, and Leicester’s lead would not last the half.
Good combination play from Anderson and the returning Ryan Fredericks saw the Brazilian cross first time, and Fornals struck sweetly from around 16 yards to earn his first Premier League goal.

The home fans among the 59,919 in attendance thought the Irons had the lead on the stroke of half-time, only for Haller’s instinctual toe-poke to go wide of the near post.

Christian Fuchs had the first real attempt of the second half, firing a low free-kick straight into Fabianski, but the shot-stopper could not do much about Gray’s effort six minutes later.

Once again, Perez was involved for the away side, waltzing past Issa Diop before releasing the Foxes forward. Gray made no error, slotting past Fabianski and restoring the away side’s lead.

Substitute Albian Ajeti was played through by fellow substitute Michail Antonio, as the duo looked to link and find a way back into the game for West Ham. Schmeichel was quick off his line to smother and deny the Swiss attacker.

With both teams tiring towards the final moments, Leicester were able to hold on and claim the three points, handing the Hammers a second defeat in 48 hours.