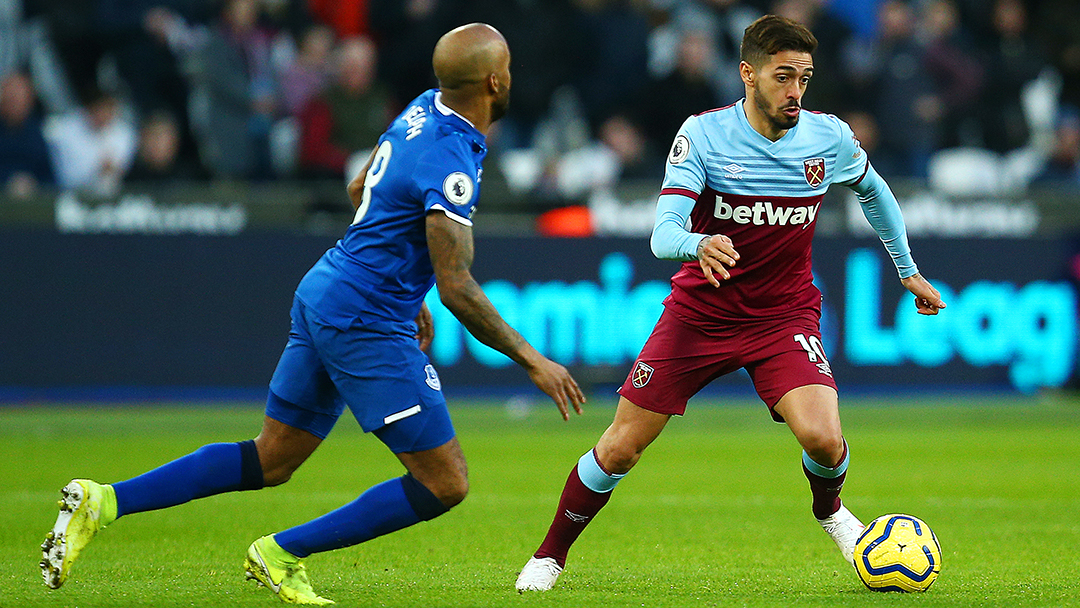 A quickfire exchange of headers late in the first half saw West Ham United held to a battling 1-1 draw by Everton at London Stadium.

The Irons poured forwards in the first period and forced Everton keeper Jordan Pickford into some excellent saves, before Issa Diop's glancing header from Robert Snodgrass' free-kick granted them a well-deserved lead shortly before half-time.

The old adage that a team is never more vulnerable than in the moments after they have scored came to the fore, however, when Everton left-back Lucas Digne's corner was flicked on at the near post by Mason Holgate and converted by Dominic Calvert-Lewin just three minutes later.

Despite making plenty of running in the second half, both teams struggled to create anything like the opportunities of the first period, and eventually had to settle for a hard-fought draw at London Stadium.

Seeking a second consecutive home win at the start of his tenure, Moyes made three changes to his outfield line-up; Diop, Snodgrass and Pablo Fornals were recalled following last week’s narrow reverse to Sheffield United.

Midweek signing Darren Randolph went straight into the starting eleven to make his second West Ham debut between the posts, with the injured Lukasz Fabianski withdrawn.

Backed by a passionate Claret and Blue Army at London Stadium, the Hammers made the most of the early running, pressing high to catch the visitors out and counter on the turnover.

It was this outlet which yielded their first sight of goal after five minutes. Noble nicked the ball from Davies in midfield and fed Fornals to counter. The Spaniard’s pass bobbled to Snodgrass on the edge of the ‘D', with time to cut inside, but his effort was set out too centrally and Pickford was able to claim.

Moments later and the first real clear-cut chance was fashioned. Noble picked Digne’s pocket high and, three-on-three, had time to play in Haller in space. Driving into the area, the Frenchman opted for a low near-post finish, which Pickford did well to boot behind for the corner.

Everton’s first opportunity of the match subsequently arrived after half-an-hour when Lucas Digne found space on the overlap to cross towards the far post, but Theo Walcott’s volleyed finish went into the ground and bounced up for Randolph to catch on the line.

West Ham’s own left-back Aaron Cresswell then ventured forward to lay on another chance for Haller, his high cross meeting the well-placed No22’s head but, under late pressure from Yerry Mina, Haller was unsighted and directed it over the bar.

Five minutes before the interval, West Ham had the lead their first-half play had richly merited, Snodgrass’ on-the-money delivery from a right-sided free-kick leant the faintest of glances by Diop in off the far post – the defender’s first goal of the season.

The Toffees were on level terms inside three minutes, however, from a set-piece of their own, Holgate nodding on Digne’s corner for Calvert-Lewin, who did well to react and head home at the far stick.

Buoyed rather than dispirited, the Irons came close again before half-time, Snodgrass’s reverse pass to Zabaleta, whose standing cross found Fornals on the penalty spot. The Spaniard’s downwards header skipped off the turf, bouncing just high enough for Pickford to react superbly and punch over the bar.

Randolph’s first true test came in the early stages of the second period when Walcott’s low, placed ball across the area threatened to reach a blue shirt, but the Irishman got a strong glove on it to divert away from the hovering Moise Kean.

The Toffees twice came close inside the next few minutes – Walcott’s chest-height ball almost being bundled in by Calvert-Lewin, before Tom Davies was unable to direct a close-range header between the posts.

Much as in the first, the Hammers began to exert an element of control after fifteen minutes of the second period played, Cresswell’s clever cross finding Haller, whose looping header was caught by Pickford – but not before the Three Lions goalkeeper came close to carrying it over his own line.

Pickford was almost caught off-guard ten minutes later when Snodgrass’ drop inside and shot looped up off Holgate. Uncertain where the ball would land, the goalkeeper flung himself at it, his fingertips pushing it just beyond the far post.

With both sides beginning to tire, that was as close as either team came in the second period, endeavour at a high but chances at a premium as both sides shared the Premier League points between them.