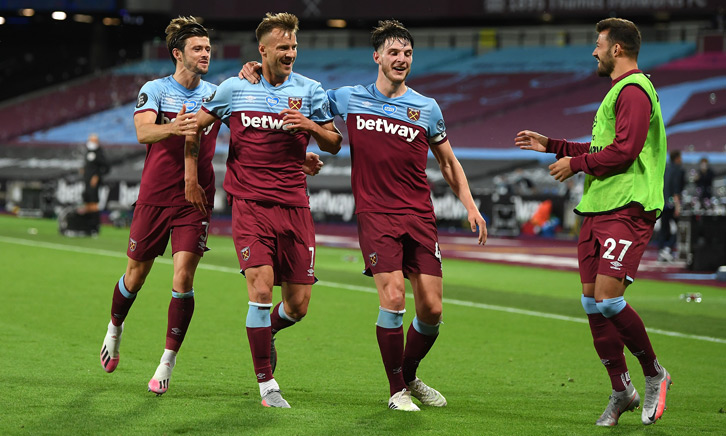 The first chance worthy of note from Wednesday’s fixture was of the speculative variety. Soucek’s clearance from a corner fell kindly to Marcos Alonso, and the Spaniard attempted an audacious overhead kick, which bounced kindly straight into Lukasz Fabianski’s hands.

West Ham then went close as Declan Rice recovered the ball well into midfield partner Soucek. The January signing played in Antonio who, showcasing his strength and speed to get past Antonio Rudiger, struck an effort narrowly wide of the far post. Agonisingly, Manuel Lanzini could not turn the ball in despite his late run either.

Chelsea’s Ross Barkley attempted a first-time strike on the turn, which again Fabianski saved coolly, but the Hammers No1 was left stranded for Christian Pulisic’s effort just a minute later, with the American’s attempt inches from nestling in the top right corner.

The ball ended up in the Chelsea net on 34 minutes as Jarrod Bowen’s corner caused havoc in the Chelsea box. Both Antonio and Soucek went for the ball, with the latter turning home with a stabbed effort.

It seemed like the midfielder’s first goal for the Hammers had given David Moyes’ side the lead, but a lengthy VAR check determined that Antonio – lying on the floor following an attempt to win the ball – was millimetres offside as Soucek took the shot.

With the pain of the VAR decision still fresh, it was further compounded just a couple of minutes later as Diop was adjudged to have fouled Pulisic in the box, resulting in a penalty. Willian converted the spot-kick to give Chelsea the lead.

There would still be further drama in the first half however as Soucek would not be denied his first West Ham goal. Once again, a corner could not be dealt with by the visiting Blues, and the towering midfielder rose highest to head home and level the game deep into added time.

Having been buoyed by their late leveller in the first half, it was West Ham who were quicker out of the blocks in the second and scored a simply fantastic goal just seven minutes following the restart.

Quick first-time football worked the Hammers from back to front, with Antonio receiving the ball from Rice. Although the forward wanted a penalty, play went on and fell to Bowen. The winger’s cross was perfect, finding Antonio, who powered home from six yards.

It was so close to a third for the Irons just moments later, with a swift counter-attack seeing Lanzini receive the ball on the edge of the box. The Argentinian’s curling effort was just over.

The returning Ogbonna had to be quick to clear when an Alonso cross almost caused issues, but there was little the West Ham defence – or Fabianski – could do about Chelsea’s levelling finish on 72 minutes, when Willian curled home an inch-perfect free-kick.

Pulisic almost netted a third for the away side just a minute later as his low effort bounced wide of the near post.

But, as Chelsea pressed for the winner in the final minutes of the game, the Hammers found themselves on the counter-attack through Antonio and Pablo Fornals. The No30 played a superb ball into substitute Yarmolenko, who coolly turned past Rudiger to slam the ball into the corner, past Kepa Arrizabalaga, and secure the three points.