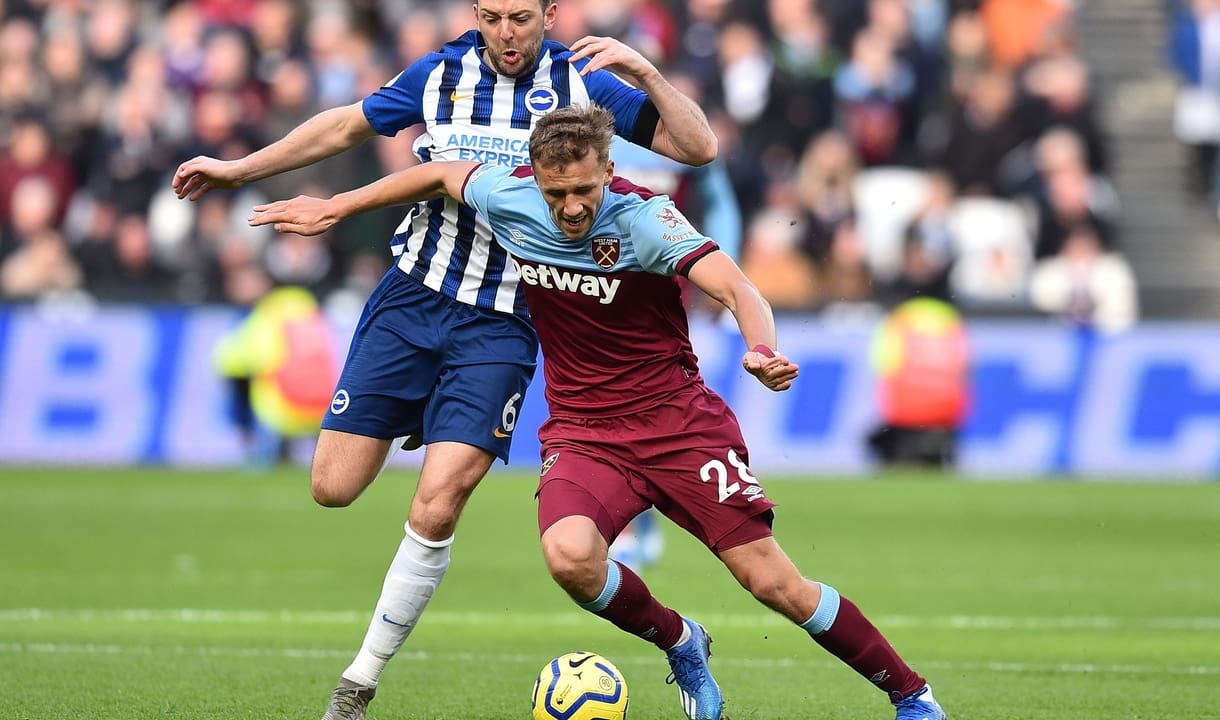 West Ham United were forced to settle for a 3-3 draw against Brighton & Hove Albion after they saw a two-goal lead slip through their grasp in the final 15 minutes at London Stadium.

The Hammers looked on course for all three points when Robert Snodgrass' double, added to Issa Diop's opener, had them 3-1 up approaching the hour.

However, Brighton came back at the hosts in the closing stages, pulling one back through Pascal Gross before a Video Assistant Referee decision ruled that Glenn Murray had not used his hand to control Davy Propper's cross before sweeping home.

Tomas Soucek was thrown straight in for his Hammers debut, and he was involved straight way, drawing a diving stop from Brighton keeper Mat Ryan after beating the offside trap to meet Mark Noble's free-kick with a firm header.

The Czech was making his presence felt early on, putting his foot into challenges and looking to support his frontmen when he had the chance.

Leandro Trossard broke the Hammers' defensive line and raced through in the left channel with 24 minutes played, but his shot lacked conviction and Lukasz Fabianski was able to save relatively comfortably.

Diop punished him for that miss six minutes later when, after Michail Antonio was fouled by Montoya, Snodgrass delivered a free-kick for the Frenchman to poke past Mat Ryan.

A good half got better for the hosts on the stroke of the interval as Snodgrass gave them a second. The No11 was involved at the start of the move, holding the ball for Ryan Fredericks to make an overlapping run. The right-back's cross was headed clear, but only as far as Snodgrass, whose volley flicked Adam Webster's heels to nestle in the net.

West Ham's two-goal lead did not last long after the game's resumption, though, as two minutes into the second half, Fabianski punched Pascal Gross' wickedly-inswinging corner onto the back of Angelo Ogbonna's head, and the ball bounced back into the goal.

The Hammers soon restored their two-goal advantage thanks to the left foot of Snodgrass.

The goal may have owed a little to another deflection - this time off Bernardo's head - but even more important was the winger's technique as he controlled the first time shot from 25-yards exquisitely to fire goalwards after Aaron Cresswell's corner was cleared.

However, Brighton were handed a route back into the match 15 minutes from time when a breakdown in communication at the back allowed Gross to nip in between Diop and Ogbonna, to prod past Fabianski.

Then, four minutes later, a cross from the right found Murray at the far post. The ball bounced very close to his arm as he controlled before sweeping home, and referee Michael Oliver initially ruled it out for handball. A VAR check overturned his decision, though, and ensured the points would be shared.