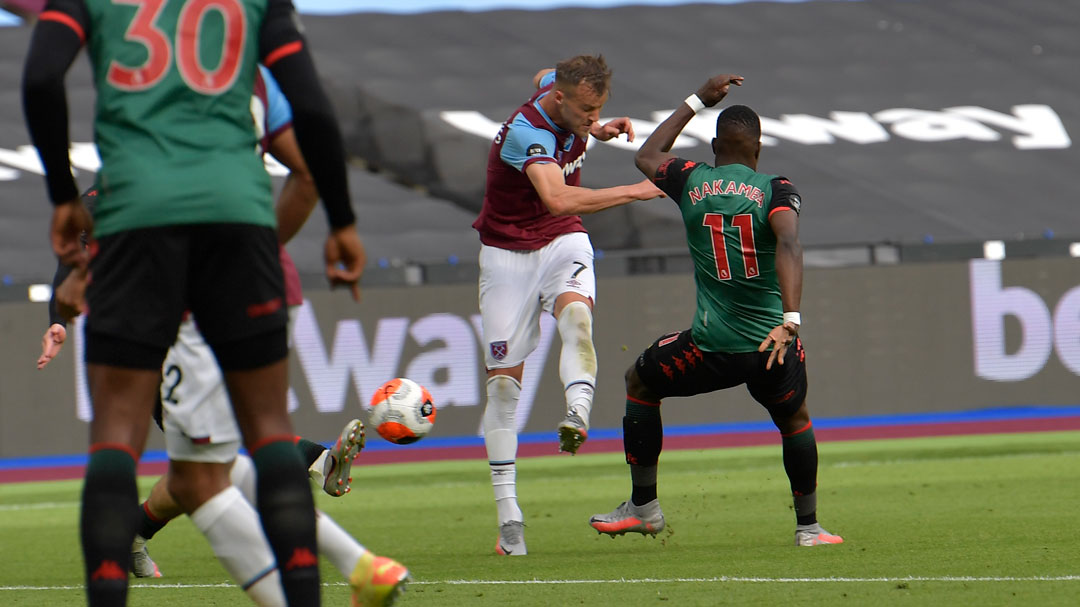 The Irons entered the match knowing that their own Premier League status was secure, and with other concurrent matches going the visitors' way in their own relegation battle, a cagey match ensued in east London.

Two late goals in the space of two minutes ultimately opened up proceedings in the second half, Jack Grealish putting Villa in front just seconds before Yarmolenko's strike looped up off the goalscorer and found the top-left corner of the net.

West Ham were full value for an industrious point, a result which sees David Moyes' men finish their campaign in 16th position.

Manager Moyes made one change to his starting eleven for the season finale, with Ryan Fredericks coming back into the team after Aaron Cresswell picked up an injury in the midweek 1-1 draw at Old Trafford.

Aston Villa, meanwhile, enjoyed no such degree of comfort coming into the game, knowing they had to match or better Watford’s result against Arsenal to themselves remain in the top flight.

It was no surprise, therefore, that the high-stakes match started tetchily – but when a chance did arrive for West Ham after ten minutes, it was an excellent one.

Issa Diop played a pinpoint long ball over the top into the run of Michail Antonio, with Ezri Konta unable to get enough contact to clear for Villa. The in-form striker, seeking his ninth goal since the season restart, was clean through on goal, but sliced his volley wide of the post.

Villa shortly after enjoyed a good chance when Matt Targett’s driven cross found Mbwana Samatta in plenty of space, but the Tanzania striker headed straight into the gloves of Lukasz Fabianski.

Some industrious work to win the ball high from Antonio almost had Jarrod Bowen in down the right channel, but the Hammers’ No30 slightly overhit his pass and the Villans were able to get bodies back to cover.

With Villa at that stage knowing a draw would keep them up, they kept numbers back, and as a result chances for the Irons proved few and far between, save for a couple of 30-yard strikes from newly-crowned Hammer of the Year, Declan Rice, which went wide of the mark.

The visitors’ best opportunity of the first 45 minutes arrived on the stroke of half-time, with Conor Hourihane laying the ball off to Jack Grealish inside the box. From a tight angle, the Villa man tried to bend low round Fabianski, but the West Ham shot-stopper plunged low to his left to catch comfortably.

Moyes introduced two fresh faces in an effort to reinvigorate his attack for the second half, with Andriy Yarmolenko and Sebastien Haller on for Bowen and Antonio at the interval.

It was Aston Villa who enjoyed the first chance of the second period, however, with Samatta’s miscue falling into the path of John McGinn in the penalty area – but Diop did well to recover and apply the necessary block.

On his return from injury, Fredericks then showcased his offensive qualities with a driving run from right-back which led to a left-footed shot from 25 yards – but the ball hit a Claret and Blue shirt before deflecting away.

Moments later, after Targett had felled Mark Noble on the corner of the area, Yarmolenko curled a close effort into the side-netting.

While chances were proving at a premium in east London, both sides were enjoying plenty of set pieces in the search for a breakthough, with Diop and Angelo Ogbonna particularly impressive at the back in dealing with Villa’s aerial bombardment.

Fittingly, it was a well-placed cross which led to West Ham’s best opening of the period, Noble floating the ball in for Haller to attack – but the Frenchman, unsighted by a Villa body, nodded over when well-placed.

West Ham’s record signing was growing into the game and, having held the ball up well out wide, eventually worked the ball – via a Manuel Lanzini lay-off – to Rice on the edge of the box. The No41 shot over from range once again, however.

With Villa’s relegation rivals, Watford, beginning to mount a comeback at Arsenal, the visitors themselves turned up the pressure by committing more bodies forward, with Diop again doing well to get his head on the end of some testing crosses.

All of a sudden, in the closing stages, two twists in the tale: firstly, Grealish beat Fredericks on the outside before then thumping the ball past Fabianski from the edge of the area, putting Villa in the lead for mere moments.

Yet just seconds later, after an accurate switch of play, Yarmolenko’s cut inside and venomous shot took a huge looping deflection off the Villa goalscorer's leg, sailing high over Reina and drawing the Irons deservedly level.

It was just reward for another hard-working display from the Irons, who, off the back of an upturn in form, can now look forward to the 2020/21 season having lost just one of their last seven Premier League games - a promising platform for their next campaign, due to begin 12 September.