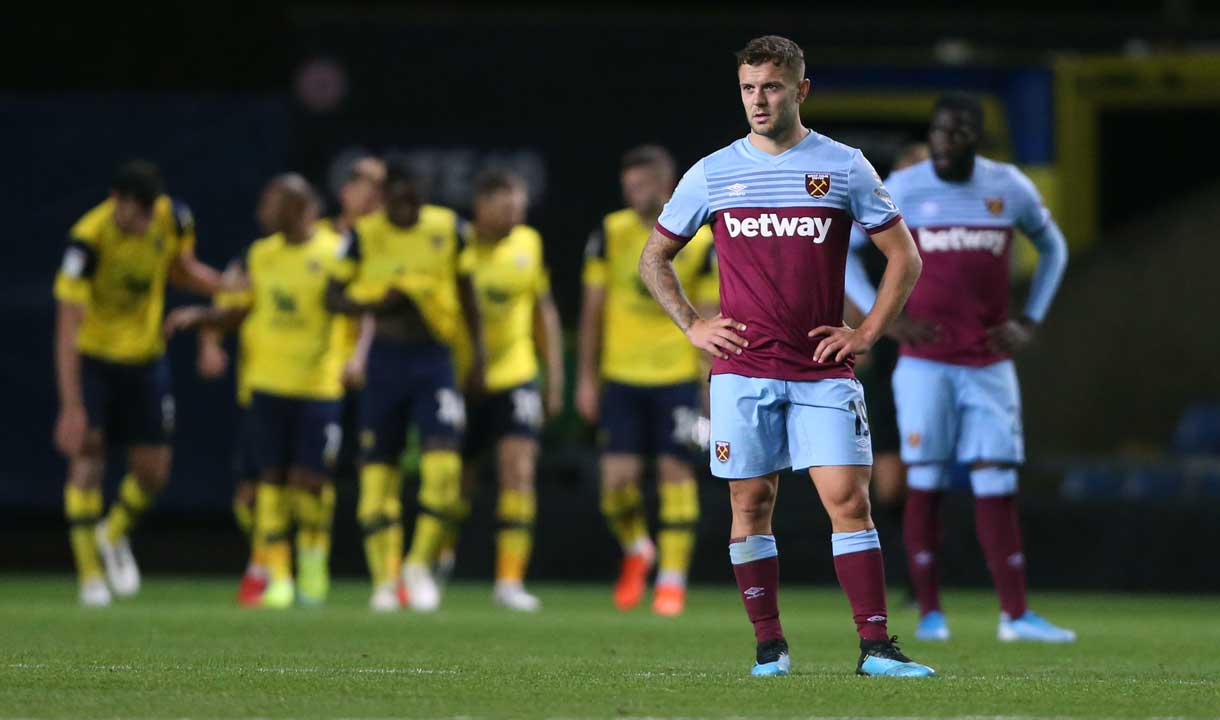 West Ham United were sent crashing out of the Carabao Cup as they slumped to a 4-0 defeat at Oxford United on Wednesday night.

The Hammers were never able to assert their authority on a humbling night at the Kassam Stadium as their hosts plundered four second half goals.

Centre-half Elliott Moore set his side on their way with a close range finish in the 55th minute. West Ham had no answer, and further strikes from Matty Taylor, Tariqe Fosu and Shandon Baptiste sealed their fate.

There was a first senior start for 21-year-old Nathan Holland, but otherwise Manuel Pellegrini named an experienced starting XI – much as he did in the previous round at Newport County.

Holland was involved from the off, making a probing run in the left channel to collect a pass from Albian Ajeti in space. Oxford defender Rob Dickie read the danger though, and closed down that room with haste to slide in and block.

At the other end, Cameron Brannagan and Anthony Forde both dragged presentable opportunities wide of the mark for the hosts, while former Hammer Rob Hall was the width of the crossbar away from giving his side a shock lead with a 26th minute free-kick which kissed the top of the frame of the goal on its way over.

The visitors were bossing possession without much reward to show for it, and the closest they came before the interval was when Jack Wilshere struck across the ball from outside the box with 33 minutes played. The fade threatened to fox goalkeeper Simon Eastwood, but he readjusted in time to hold onto the shot.

Oxford were the team to strike first, ten minutes after the interval, when they pumped a free-kick from deep into the box. West Ham couldn’t clear and Moore took full advantage, turning and finding the bottom left-hand corner from eight yards.

Three minutes later Roberto was at full stretch to claw Jamie Mackie’s flicked effort, but West Ham did not heed the warning and with 19 minutes to go they found themselves two behind.

Substitute Taylor was the goalscorer, stealing in at the far post to knock home from close range after being teed up by fellow sub Mark Sykes’ teasing low cross.

If that wasn’t bad enough for the visitors, it was to get even worse six minutes from time when Fosu got the better of Arthur Masuaku on halfway, allowing him to streak through, round Roberto and knock home.

There was still time for an injury time fourth, as Baptiste danced clear in the box and slotted into the bottom right hand corner.