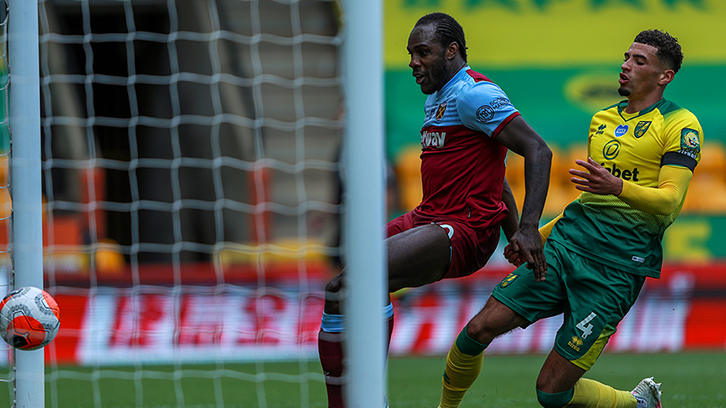 The Irons were hugely impressive from the off in Norfolk, and led by two at the interval through set-pieces at either end of the half: the first goal arriving when Antonio stabbed home a corner flicked on at the near post after 12 minutes, before the No30 beat Timm Klose to the ball to head in Mark Noble’s in-swinging free-kick.

Imperious all game, Antonio doubled down on his tally in the second half, going on to become the first Hammer ever to score four times in a Premier League match when he finished from Noble’s lobbed through pass and, shortly afterwards, Ryan Fredericks’ pull-back.

Four poachers’ goals capped a wonderful individual – and collective – display from the men in Claret and Blue, who moved six points clear of the Premier League relegation zone at the final whistle, condemning their opponents to a return to the Championship in the process.

After an attacking display didn’t yield the goal it deserved in Wednesday’s frustrating loss to Burnley – when West Ham created 21 shooting opportunities without scoring – the Irons set out their stall early on Saturday lunchtime, seemingly determined to add a more ruthless edge to their approach play at Carrow Road.

Manager David Moyes made one change to his starting XI, with skipper Noble returning to the side for his 499th appearance in a Claret and Blue shirt – a hugely influential one which fittingly came versus the same side he made his first-ever start for the Irons against.

West Ham felt they had a good claim for a penalty inside the opening two minutes, Jarrod Bowen’s mazy run seemingly ended by a Norwich challenge inside the area – but nothing doing from referee Kevin Friend.

Just a minute later, quick footwork from Michail Antonio helped him cut in from the left and, in mishitting a shot, inadvertently set up Tomas Soucek. Time and space was always running out for the midfielder to dig the ball out from under his feet, and Soucek’s prod hit the side netting, with Norwich keeper Tim Krul in close proximity.

That bright start continued when Aaron Cresswell’s exquisitely placed ball to the near post was met by Antonio on the stretch – but Krul reacted brilliantly to tip the ball wide of the post.

The Hammers smelt blood, and from a subsequent corner, Issa Diop was there at the near post to flick the delivery towards the back stick. Controlling a volleyed finish from inside the six-yard area, Antonio’s third goal in four games was rich reward for the team's excellent start in Norfolk.

Norwich then had a half-chance following some neat interplay outside the area, but Lukasz Fabianski was quick off his line to come out and claim at the feet of Onel Hernandez.

Minutes later, only a well-timed tackle from Ben Godfrey denied Bowen a clear sight at goal on the edge of the area, after Antonio had used all his pace and power to draw away the Canaries’ centre-backs.

Norwich did enjoy a better spell after the first drinks break of the match, Hernandez unable to adjust when well-placed to meet a Jamal Lewis’ pull-back, before Mario Vrancic’s 25-yard free-kick lacked the dip necessary to nestle in Fabianski’s top corner.

But this was West Ham’s day from the start. Shortly before half-time, Noble was afforded plenty of time to clip a curling cross into the area, where Soucek struck a fierce first-time volley. Sailing just above Krul, however, the Dutch goalkeeper was positioned well to tip it over the crossbar.

As the clock ticked into injury time, West Ham got the second goal their overall game had warranted. After Antonio had done well to win a free-kick on the corner of the area, Noble floated the ball in – and the No30 saw off the challenge of Timm Klose to head superbly into the bottom corner.

There was still time before the break for Ryan Fredericks to fire over from a tight angle, and for Emiliano Buendia to force Fabianski into a decent flying save, but all-in-all, West Ham’s opening 45 minutes – led so impressively by Antonio – will have been hugely satisfying for Moyes and his backroom staff.

Shortly after the restart, Antonio's hat-trick – seemingly inevitable – was complete.

A brilliant chipped pass from Noble put the centre-forward clean in on goal and, despite Krul saving his first, low finish, Antonio reacted well to nod the rebound goalwards - and then hold off the defender to see his premier hat-trick goal over the line.

That treble was West Ham's seventh in the Premier League era – their first since Andy Carroll’s against Arsenal in April 2016 at Boleyn Ground, and their first away from home since Paul Kitson’s at Charlton in 2001.

The game was won, West Ham buoyant and Norwich seemingly acceptant of their fate.

The Hammers had chances to extend their lead with Cresswell coming close to laying on Antonio’s fourth with a drilled low cross, well cut out at the near stick, before Pablo Fornals cut in from the left and hit a rising shot from 22 yards just wide of the mark.

With a quarter of an hour to go, Antonio had a fourth – and it was again started by a perfectly weighted Noble pass, this time playing in Fredericks down the right channel. The full-back’s cute cut-back to the near post was tucked in neatly by the West Ham striker.

That was his last contribution in a marvellous performance, Sebastien Haller coming on for the final 13 minutes of a swashbuckling West Ham United display which has put a promising six-point gap between them and their rivals in the Premier League drop zone - and in some style.