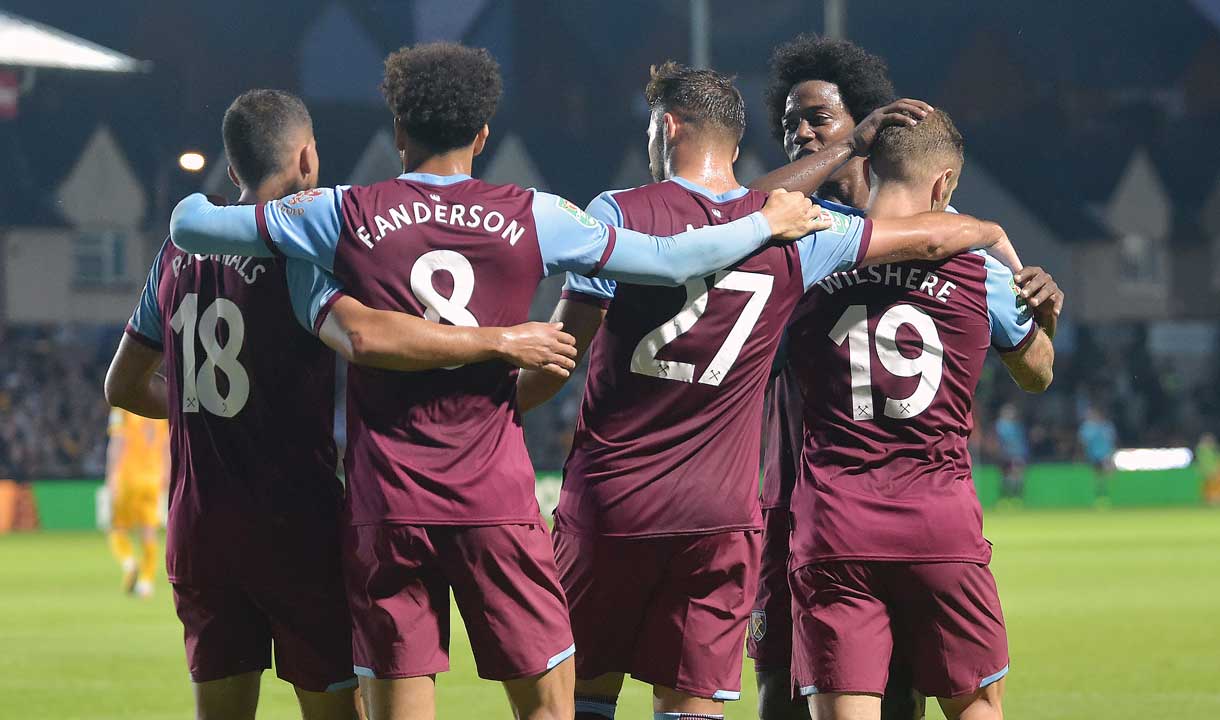 West Ham United booked their place in the Carabao Cup third round with a 2-0 victory over League Two side Newport County on Tuesday night.

Newport have made a name for themselves the cups recently, taking Tottenham Hotspur to an FA Cup replay two seasons ago, before defeating Leicester in the same competition last year, but West Ham ensured there was to be no repeat this time in South Wales.

It wasn’t for the want of trying on Newport’s part, as Mike Flynn’s team gave it a real go before the Hammers took the contest away from them.

Jack Wilshere’s calm finish opened the scoring two minutes before half-time, while summer signing Pablo Fornals wrapped it up with his first goal in Claret & Blue midway through the second period.

The Hammers named an experienced side, but were forced into an early change when Michail Antonio pulled up in leading a quick break. Felipe Anderson came on in the No30’s place.

The home crowd were raucous in the early stages, although they were almost silenced in the 14th minute when an excellent move involving Issa Diop, Carlos Sanchez, Wilshere and Felipe Anderson ended with Aaron Cresswell cutting the ball back to Fornals, whose bobbling shot deceived goalkeeper Nick Townsend and bounced back off the post.

Ten minutes later the League Two side should really have taken the lead. Issa Diop was caught on the ball as he tried to turn away from the danger zone and Tristan Abrahams  crossed immediately to his strike partner Padraig Amond who, with only Roberto to beat, shot straight at the away goalkeeper.

Newport were enjoying a good spell and, just past the half-hour, Corey Whitely had time down the right to fire over a low cross which Diop almost touched into his own net.

West Ham knew they were in a real game, but two minutes before the break they broke the home side’s resistance. The goal owed a little to a stroke of luck initially, as Wilshere’s attempted pass to Albian Ajeti broke back to him off Newport defender Kyle Howkins. The next two touches were cold in their ruthlessness, as Wilshere strode into the box to slot into the bottom right corner.

Ajeti twice went close with headers at the start of the second half, while at the other end Abrahams was inches away from connecting with Robbie Willmott’s teasing low cross.

With 65 minutes on the clock, though, West Ham finished the game as a contest with their second goal. Wilshere was involved again, taking control of possession on the edge of the box before feeding through to Felipe Anderson. His low cross may have been intended for Ajeti, who went down at the near post, but Newport couldn’t clear and Fornals stole in at the far to knock home.

Newport’s Josh Sheehan passed up a late opportunity to grab a consolation when he struck the top of the visitors’ crossbar but this was a job well done on a tricky stage for the Hammers.