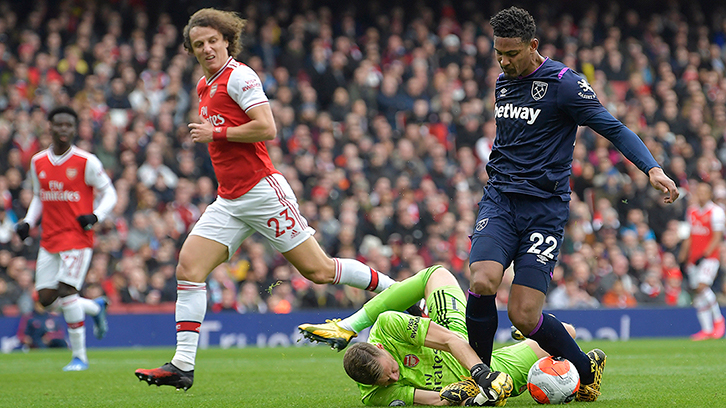 In an open and exciting contest at the Emirates, the Irons created no shortage of chances throughout the 90 minutes, but were undone when Mesut Ozil - initially adjudged to have been in an offside position - cushioned the ball across goal for Lacazette to slam home.

The score-line therefore seemed a touch harsh on David Moyes' side, who paid the frustrating price for failing to convert some more than presentable opportunities.

Manager David Moyes named an unchanged starting eleven – the first time West Ham have done so in the Premier League since November – as he sought to build upon a promising display in the 3-1 win over Southampton.

An open game saw the Hammers get off to a promising start inside three minutes after Jarrod Bowen, looking to follow up on a goalscoring home debut against the Saints, intercepted Granit Xhaka’s loose ball out at the back.

Without many options, the former Hull forward took a couple of touches and struck a low shot which Leno got his fingertips to, but the German goalkeeper would have breathed a big sigh of relief to see the ball cannon off the outside of his post after evading him.

Employing the pace which was utilised to devastating effect in recent weeks, a neat counter between Fornals and Antonio saw the Spaniard play the Englishman in behind, but with a two-on-one situation in his favour, Antonio’s pull-back could not find Haller.

It could have proved costly moments later when Nketiah chested down a loose ball for Ozil twelve yards out, whose strike – initially destined for the bottom corner – deflected away off Cresswell, Fabianski claiming the rebound.

The Hammers enjoyed yet another clear chance inside the first quarter of the match when Noble’s precise through-ball found Haller clear, but a heavy first touch allowed Leno to pounce at his feet and push it away from danger.

Arsenal came close again when Pepe’s clever touch recycled a corner and allowed Aubameyang to loop the ball up for Sokratis. The Greek defender was afforded too much space six yards out to attack it, yet headed over via the crossbar.

As the half wore on, the home team began to click ominously into gear, only a fine last-ditch tackle from Rice denying Pepe the chance to shoot after cutting in on his left.

Despite this, Moyes’ men continued to look a threat on the counter and from set-pieces. A Noble corner late in the first period was met at the far post by Diop, who headed down for Antonio. The forward was two yards out but, awkwardly adjusting, guiding it wide.

The goalless first half seemed to spur Arsenal into more life after the break; Fabianski was forced into a fine save with his legs after Saka had slipped in Pepe on the angle, before Diop recovered well to ensure the rebound couldn’t reach Nketiah.

Yet without seeing much of the ball, West Ham’s menace remained. Antonio had another reactive chance when Haller dangled a leg towards Cresswell’s low cross, flicking it onto the No30. He headed goalwards from six yards, but was denied by a sharp Leno reflex save.

The game was stretched, with Leno stopping a low drive from Bowen – hit too close to the keeper, in truth – before Cresswell blocked Lacazette’s volley from Saka’s deep cross.

The two teams continued to trade chances, first Diop intervening when it looked like Lacazette had a clear sight of goal on the penalty spot, before Fornals volleyed Noble's cross into the ground and into the arms of Leno - albeit from an offside position.

With just over ten minutes to go, heartbreak.

Aubameyang's shot deflected up off the legs of Rice and reached Ozil, who headed back across goal for Lacazette to apply a simple finish. The referee's verdict ruled the German playmaker offside in the first instance, but upon the tightest of VAR reviews - merely millimetres in the call - the goal was given.

West Ham were not dispirited and could have levelled matters within minutes when Haller slid onto Bowen's bouncing low cross, but once again Leno's reflexes were sufficient to beat the ball away.

The Irons continued to apply the pressure as Fornals misconnected with Cresswell's inviting delivery, before David Luiz slid in to deny Haller, but it was destined to prove a case of 'what might have been' in north London on a frustrating Saturday afternoon.