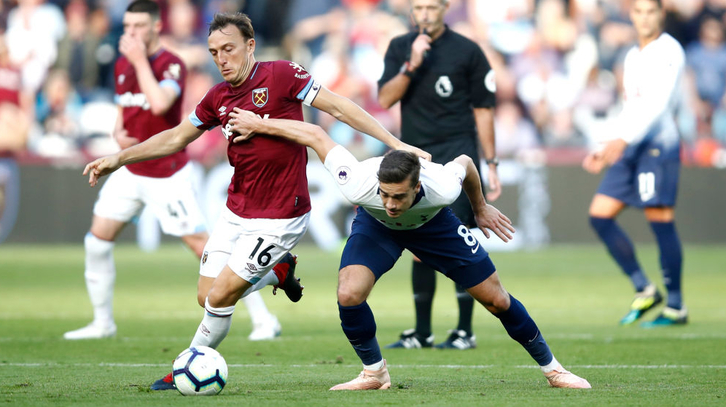 Erik Lamela's first half header was enough for Tottenham Hotspur to beat West Ham United in a close encounter at London Stadium.

The only goal of the game came just moments before the half-time whistle as Lamela lept highest to steer his effort into the far corner.

West Ham enjoyed a number of chances to score and get back into the match, with Marko Arnautovic forcing two excellent saves from Hugo Lloris, while Chicharito was able to steer a chance into the back of the net only for the goal to be ruled out for offside.

An even first-half saw West Ham earn the first chance of Saturday’s fixture, with Arnautovic firing a powerful effort straight at Hugo Loris.

Declan Rice was on hand to block a rocket from Moussa Sissoko, before Issa Diop also made a terrific challenge to deny Harry Kane as the striker burst into the penalty area.

West Ham’s best chance of the opening period came on 37 minutes. Andriy Yarmolenko cut a pass back into the path of Robert Snodgrass, who fired a first-time strike on goal, but Toby Alderweireld was able to get into position and clear before the ball crossed the line.

Unfortunately, the Hammers then lost Yarmolenko, who picked up an injury, which led to the introduction of Grady Diangana.

On 44 minutes, Tottenham took the lead. Sissoko was able to get past Felipe Anderson on the flank, and dinked in a cross, which Lamela headed into the far corner after getting away from Pablo Zabaleta.

Spurs could have added another prior to the half-time whistle, but Lukasz Fabianski was on hand to make a fabulous double save to deny Lamela his second.

Rice then went close from a corner before there was another chance for Arnautovic, with the Austrian latching on to a Balbuena knockdown. His strike on the edge of the area was tipped away.

As the game ticked over to the hour mark, the London Stadium crowd saw a return to action for Chicharito, who had missed out for a number of weeks due to illness. The Mexican came on in place of Felipe Anderson.

Balbuena himself then met a corner for West Ham, but his header was wide of the post.

West Ham continued to enjoy the better of the chances in the second period and, on 85 minutes, it looked like the home side's efforts had finally been rewarded.

Excellent link up play between Arnautovic and Chicharito saw the Austrian play a low ball into the striker, who found the rood of the net with a powerful strike. However, the linesman's flag had been raised in the buid-up, with Arnautovic straying offside.

As the game ticked into extra time it looked like West Ham were in for the equaliser, only for Lloris to once again deny Arnautovic, after Chicharito's well-placed through ball.