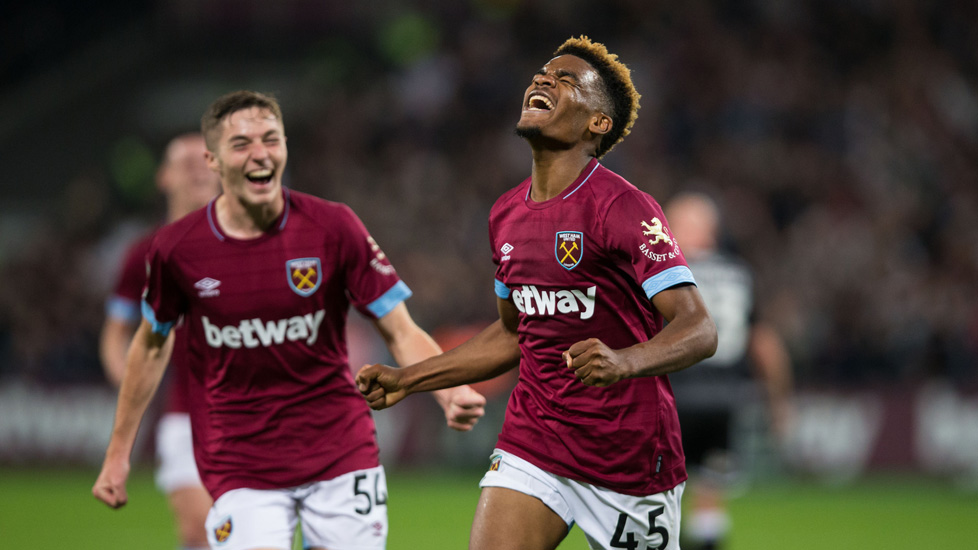 West Ham United supporters enjoyed a sensational night of cup football at London Stadium, as the Hammers defeated Macclesfield Town 8-0 in the Carabao Cup third round.

Michail Antonio, Robert Snodgrass and Lucas Perez put West Ham in the ascendancy in the first half with a trio of well-worked finishes, but the Irons continued to press in the second.

Ryan Fredericks blasted a powerful effort in on 51 minutes before Angelo Ogbonna netted his second successive goal in this competition with a header.

Snodgrass then grabbed his second, and debutant Grady Diangana got in on the action, who scored the brace his fantastic performance deserved.

The game almost got off to the perfect start for Diangana, who combined with Lucas to get into space on the right of the box. The 20-year-old’s low shot was just wide.

The Hammers unfortunately lost Carlos Sanchez due to an injury less than ten minutes into the first period, with Declan Rice coming on, and it was the substitute who saw an effort excellently saved by Kieran O’Hara, as his header from a corner was pushed away.

Less than a minute later and West Ham were in front. Rice superbly won the ball back in a dangerous position, and his pinpoint cross was met by Antonio, who steered his header expertly home to give the Irons the lead.

As the match ticked past half-an-hour, the Hammers added a second. Diangana was terrific in the build-up, skilling his way into the box, before unleashing a powerful shot that O’Hara could only palm upwards. Snodgrass was in the right place to turn the ball home from a yard out.

The Academy graduate continued to be a threat for the home side, and went close again, before Lucas effectively secured the tie before half-time with a coolly volleyed finish, sweeping home with a low effort after Aaron Cresswell’s well-placed cross.

A 3-0 half-time advantage saw Manuel Pellegrini make his second change of the match, and another debutant was given a chance to make an impact in the senior team, with Conor Coventry coming on in place of Pedro Obiang.

It only took six minutes of the second period for West Ham to add a fourth; a finish crafted solely by Ryan Fredericks. The right-back appeared to have limited options on the flank, but used his pace to take two Macclesfield defenders out of his way before unleashing a thunderbolt of a strike into the net from a tight angle.

On 55 minutes, Ogbonna made it five for the Irons, with his fourth goal in five EFL Cup games. Having scored in wins over Bolton Wanderers and Tottenham Hotspur last season, the Italian also netted in the win over AFC Wimbledon a few weeks ago.

The Italian’s fantastic goal run in this tournament continued, heading home from a corner.

As 60 minutes ticked onto the clock at London Stadium, Snodgrass swept home his second of the game. Excellent work from Fredericks crafted the space, and the Scotsman was on hand to turn the ball into the net.

It was then time for Diangana to get involved, with the youngster getting a finish that his performance deserved. The No45 linked well with Lucas, playing a one-two that saw Diangana slot the ball under O’Hara and into the net.

The 20-year-old wasn’t finished there though. A terrific through-ball found the winger inside the box on 82 minutes, and Diangana again showed a maturity beyond his years to slot home.