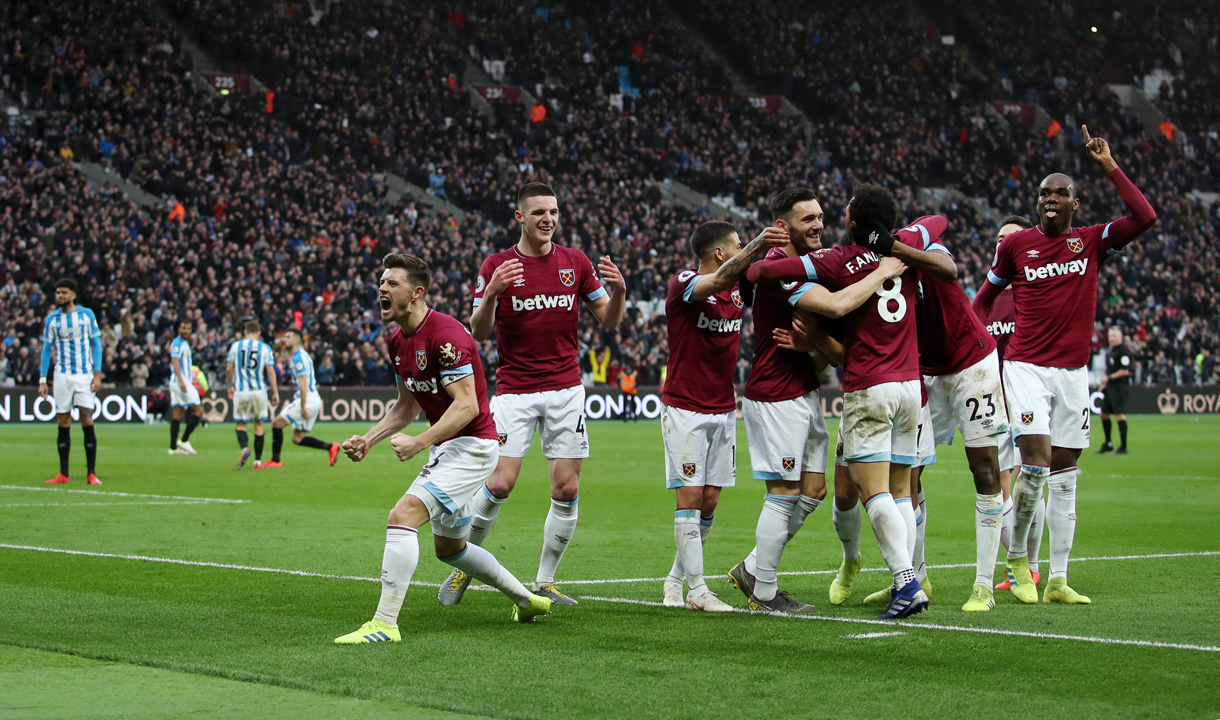 West Ham United maintained their unbeaten home start to 2019 with a dramatic 4-3 victory against Huddersfield Town on Saturday.

They sure did it the hard way though, as Huddersfield looked certain to take the points when they moved into a 3-1 lead midway through the second half.

However, West Ham came storming back with an incredible final 15 minutes, which saw them net three times and leave Huddersfield heartbroken.

The game started at a measured pace, but West Ham were close to an eighth minute opener when Felipe Anderson delivered a deep corner, Declan Rice sent the ball back into the middle and Michail Antonio’s header clipped the crossbar.

Another set piece seven minutes later paved the way for the first goal of the game. Marko Arnautovic was fouled in the left channel, giving Aaron Cresswell the chance to get the ball into the box.  Manuel Lanzini took it down and was bundled over by Aaron Rowe, giving referee Jonathan Moss no choice but to point to the spot.

Noble stepped up and did the rest, shooting down the middle as Jonas Lossl dived to his left.

The lead was to only last two minutes though, as West Ham switched off from a corner, allowing Juninho Bacuna all the space he needed to head home from Aaron Mooy’s delivery.

If that came as a shock to the hosts, worse was to follow 13 minutes later when Huddersfield took the lead.  It came from another set play situation, as Alex Pritchard played a free-kick out to Chris Lowe in space on the left. He crossed low and Karlan Grant was there to turn home.

It has been an uninspiring half from the Hammers and Manuel Pellegrini responded by bringing Chicharito on from the bench at the break.

Arnautovic had a chance to level on 63 minutes when Felipe Anderson made a strong burst from midfield and clipped a cross into the striker’s feet. He took the shot on first time, but Lossl made the save.

Two minutes later, Huddersfield added a third in fine style as Grant cut the ball onto his right foot and arrowed a shot beyond Lukasz Fabianski’s dive and into the top corner.

Huddersfield looked to be on the cusp of a rare victory, but the Hammers were not done yet and came roaring back into the contest in the final 15 minutes.

First, Ogbonna rose highest to send a towering header from Aaron Cresswell’s left-wing corner into the net to make it 3-2.

Then, with seven minutes remaining, another Cresswell corner flew through the box and to Samir Nasri on the other side. He crossed to the back post and Chicharito was there to plant a diving header past Lossl.

There was still more drama to come, and in the first of five added minutes, Cresswell played a short corner to Felipe Anderson, who took a touch and sent a wickedly curving ball into the six-yard box where Chicharito glanced his header home.

It was a wild end to a strange match, but one which the Hammers will be delighted to have taken maximum points from.