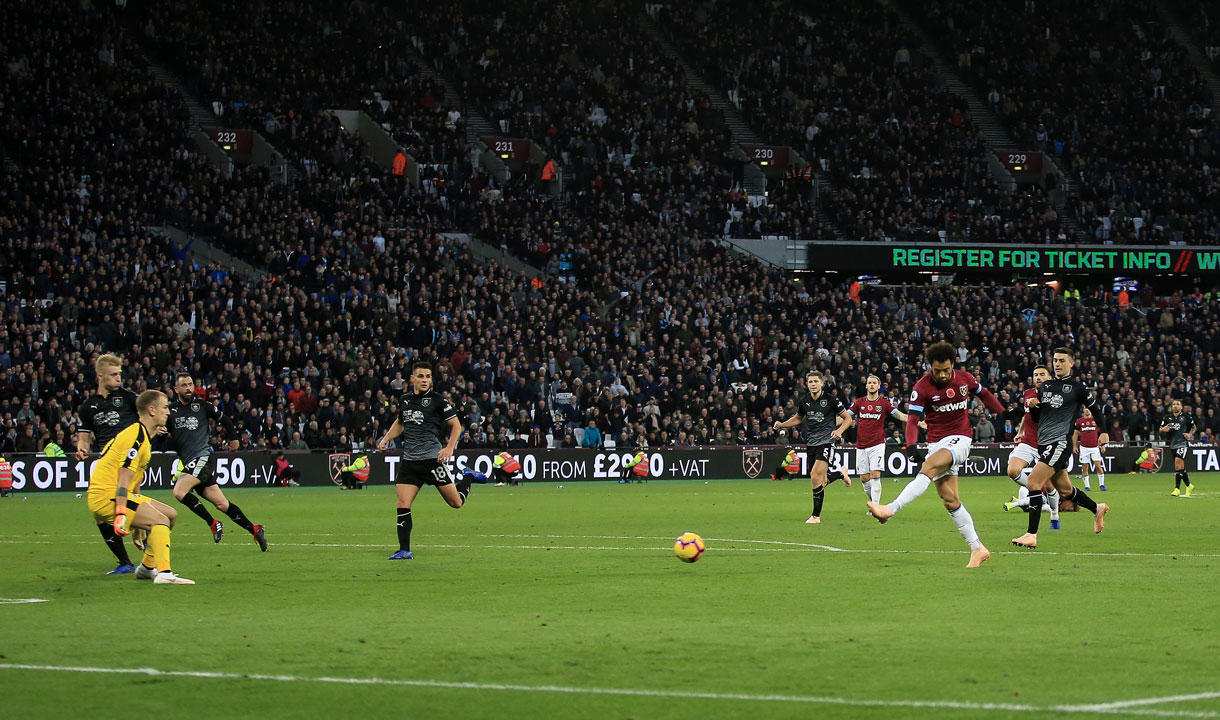 Felipe Anderson scored a brace as West Ham United twice recovered from the blow of losing a lead to defeat Burnley 4-2 at London Stadium on Saturday.

The Brazilian’s second half goals made it 2-1 and 3-2 to the Hammers, following an opening 45 minutes which West Ham dominated but came in level after Johann Berg Gudmundsson cancelled our Marko Arnautovic’s opener.

West Ham enjoyed 63 percent possession and had 21 shots to Burnley’s six, but they feared the points would have to be shared when Chris Wood headed the visitors level again at 2-2 with just 13 minutes left.

But the hosts kept going and were rewarded first with six minutes to go with Felipe Anderson’s second, before Chicharito made the game safe in injury time.

West Ham welcomed Arnautovic back into the starting XI following illness and he had an immediate impact, firing the Hammers in front with just ten minutes on the clock.

It was Arnautovic’s pressure which made the chance, as he forced James Tarkowski into underhitting his packpass, allowing the No7 a clear path to slide past Joe Hart.

Ten minutes later the Austrian was in again, this time from a Felipe Anderson pass, but Hart closed the angles down well to block his shot behind.

West Ham kept on coming and with 32 minutes on the clock Arnautovic returned the favour to Felipe Anderson, and his shot beat Hart but not Ben Mee, who recovered brilliantly to cover behind his keeper and head off the line.

Shortly afterwards the London Stadium crowd were convinced they should have had a penalty when Steven Defour took down Grady Diangana, but referee Roger East thought otherwise and Burnley somehow found themselves level on the stroke of half-time.

It was a goal out of nothing as Ashley Westwood collected an Issa Diop header and knocked a pass through for Gudmundsson to finish past the advancing Lukasz Fabianski.

West Ham looked to pick the pace up again at the start of the second period and Hart parried a low drive from Robert Snodgrass, before the keeper had to be alert again to beat away Arnautovic’s shot from distance.

Burnley were trying to take the sting out of the contest, and the Hammers introduced Chicharito from the bench with 61 minutes played as they looked to force a way through.

Seven minutes later the goal arrived. Diangana played a key role, driving from midfield and getting his pass away to Felipe Anderson, just before Tarkowski arrived to clatter him. The Brazilian took a touch and threated the ball through Hart’s legs to find the bottom left corner.

But Burnley found a way back into the contest again and levelled for a second time 13 minutes from time when Wood rose highest to head Robbie Brady’s corner home.

There was still time for one more Hammers twist in the tale, and after Arnautovic’s shot was blocked, the ball dropped perfectly for Felipe Anderson to send a deflected effort past the helpless Hart.

Then, in added time, Chicharito made the game safe by clipping over Hart after Antonio headed Felipe Anderson’s sweeping pass into his path.