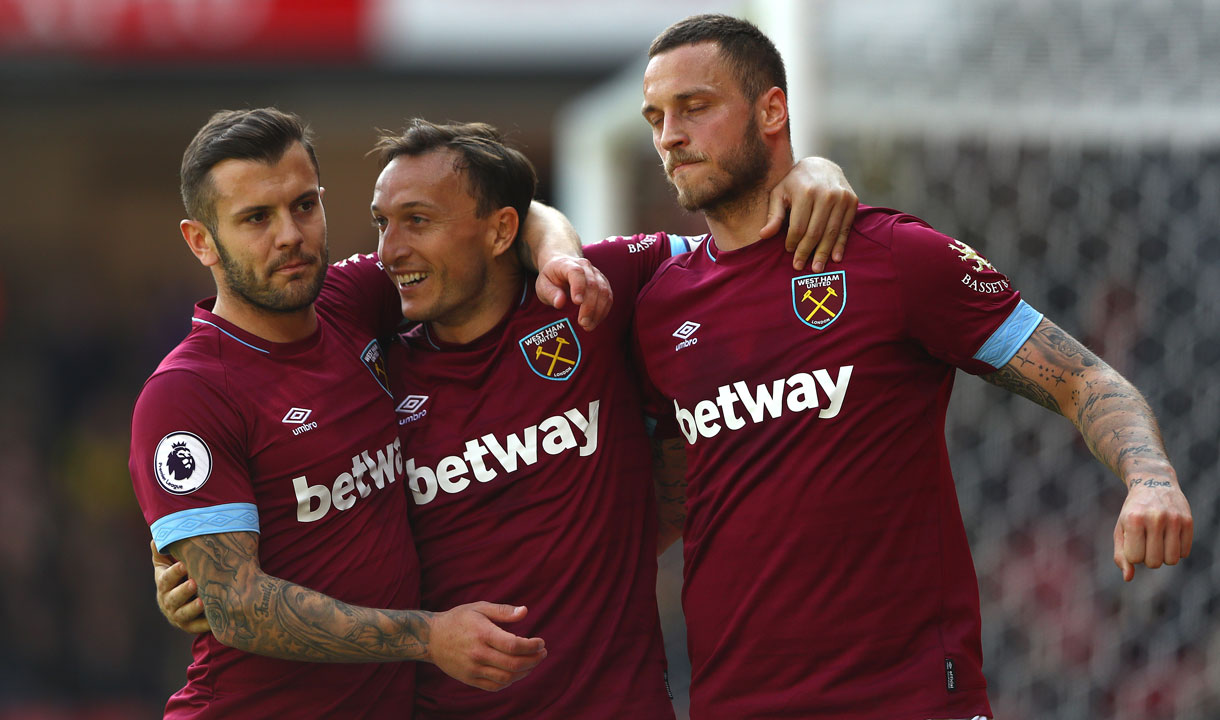 West Ham United rounded off the 2018/19 season with their biggest win of the campaign on Sunday, as they hit four past FA Cup finalists Watford at Vicarage Road.

The Hammers moved 2-0 up before the break, through goals from skipper Mark Noble and Manuel Lanzini.

Watford gave themelves hope immediately after the restart, when Gerard Deulofeu took advantage of a defensive lapse, but after Jose Holebas was red carded, the visitors made sure of the points in the game’s final quarter.

First, Marko Arnautovic scored to ensure he would finish the campaign as the Hammers’ top goalscorer for a second year in a row, before Noble set the seal on his team’s third straight win.

Watford were quickly out of the traps and thought they had created a golden chance inside the first 20 seconds when Will Hughes slipped a pass through to Deulofeu. The Spaniard went on to put the ball in the back of the net, but he had already been called back for an offside.

Deulofeu was a big influence on the game early on, and he brought a diving stop from newly-crowned Hammer of the Year Lukasz Fabianski with a shot from just outside the box, after the ball broke to him off Declan Rice.

Watford might have been making the early running, but it was West Ham who were to move in front with 15 minutes on the clock.

It was a really well-worked goal for skipper Noble too, as he exchanged passes with Michail Antonio in midfield, allowing him to advance on Christian Kabasele, drop his shoulder to evade the defender’s attentions and slot left-footed into the bottom corner.

Roberto Pereyra shot at Fabianski when well-placed inside the box as the Hornets looked for a response, but it would get even better for the Hammers before the half was out.

Lanzini doubled the advantage on 39 minutes, following up to nod into an empty net after Antonio muscled his way into a shooting position 20 yards out and thumped a rocket of a shot onto the underside of the crossbar, via Ben Foster’s fingertips.

Watford, incredibly, got themselves back into the contest inside the first ten seconds of the second period. Pablo Zabaleta, on for Ryan Fredericks after the No24 picked up a knock early on, underhit a backpass to Fabianski and Deulofeu stole in to touch home.

The drama wasn’t to stop there, however, as just two minutes later the Hornets were reduced to ten men with Holebas seeing red for dragging Antonio down as he streaked clear onto Felipe Anderson’s through ball.

Watford kept on coming, even with their disadvantage, and Arthur Masuaku needed to make a well-timed tackle to deny Andre Gray from close range as the clock ticked past the hour.

West Ham needed to insurance of a third and it arrived 19 minutes from the end. Foster could count himself desperately unfortunate again, after he produced a wonderful save to touch Felipe Anderson’s controlled volley onto the post, only for Arnautovic to follow up with the decisive touch.

The visitors were not finished, and seven minutes later they were given the chance to make it four when Kiko Femenia clumsily chopped Antonio down inside the area. Noble duly obliged from the spot, sending Foster the wrong way to tuck inside the left hand post.