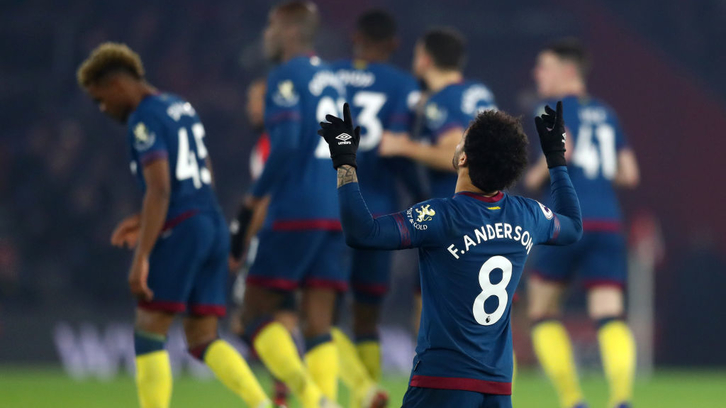 Felipe Anderson’s superb second-half double saw West Ham United battle from going behind to secure a 2-1 victory away to Southampton.

The dazzling Brazilian fired home a brilliant strike from 25 yards on 53 minutes to level the game at St Mary’s Stadium, after the ball had been scrambled into the Irons net by Nathan Redmond just a few moments prior.

Anderson would strike just before the hour mark, completing a terrific counter-attack, curling past Alex McCarthy to give the Hammers all three points.

The victory pushes West Ham up to ninth in the table, marks three consecutive away victories, and is the side’s fifth win in six games.

The opening opportunities fell to the home side in Thursday’s evening encounter, as Southampton looked to continue their recent good form. Nathan Redmond tested Lukas Fabianski from distance, while Danny Ings found the side netting.

Lucas Perez had the best chance of the first half for the Irons. A superb counter saw Snodgrass find Felipe Anderson on the left. Aaron Cresswell overlapped, receiving the ball, and sent in an excellent cross. The ball was met by Lucas, but the striker could only turn his shot wide.

It was an encouraging first half for the Irons, but the game was goalless at half-time.

It seemed West Ham were made to pay for not finding the goal in the first half, as Southampton took the lead on 50 minutes.

A shot from Romeu hit Redmond, who turned and had an effort on goal, forcing Fabianski into a phenomenal save. Romeu followed up, but the Poland international was on hand again to deny the Spaniard. However, it was third time lucky for the Saints, with the ball scrambled into the net after pressure by Redmond.

It took the Hammers just three minutes to level however, and what a leveller it was from Felipe Anderson! The Club record signing collected the ball from a Southampton clearance around 25 yards from goal, and unleashed a powerful low shot into the bottom left-corner, leaving McCarthy no chance.

West Ham’s first goal was a moment of individual brilliance and the second, six minutes later, was a masterclass in counter-attacking football.

Issa Diop cleared a corner to Snodgrass, who found Antonio in acres of space on the left. The desire from West Ham saw five players pile forward, and Antonio found Anderson, who raced through and curled home to give the Hammers the advantage.

Southampton pressured to level the game with Redmond through on goal just a few moments after Anderson’s second, only Diop to make an incredible tackle to deny the winger.

The Brazilian would then tee up Perez, who rocketed a shot on target, only for Vestergaard to deny the Spaniard with a timely block.

Although the home side pressed, the Hammers were able to hang on and claim a deserved win on the round once again.