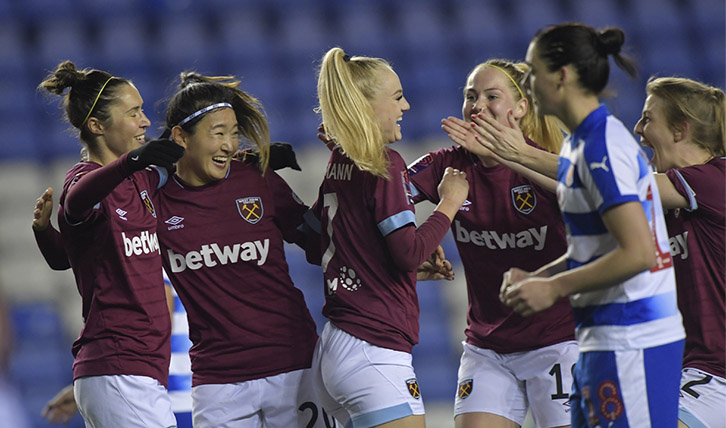 An Alisha Lehmann brace was enough for West Ham to beat Reading 2-1 at the Madejski Stadium on Wednesday night in the FA Women’s Super League.

Lehmann got her first goal on the night – a seventh of the season – on 20 minutes as Cho So-Hyun played a great through ball which allowed the Swiss international to score her first.

Then nine minutes into the second half the same combination provided a second after So-Hyun once again played her through on goal.

Fara Williams scored from the penalty spot to get Reading back into the game but the Irons held on to record a third successive victory.

It was a bright start from the Hammers as Jane Ross had the first chance of the game, but it was easily held by Grace Moloney in the Reading goal.

Leanne Kiernan had the next chance on five minutes as she moved from the wing in to the centre, but she fired her shot wide.

On 13 minutes the Hammers had a penalty claim waved away by the referee. Ria Percival looked as though she was caught by the defender, but the referee signalled it as a fair tackle.

Seven minutes later the Irons made the breakthrough. So-Hyun excellently won the ball back in the middle of the pitch and threaded a great ball to Lehmann who made no mistake and gave West Ham the lead.

Just before the break, Reading looked to get back into the game, but Anna Moorhouse made a great fingertip save to deny Rachel Furness’ header. 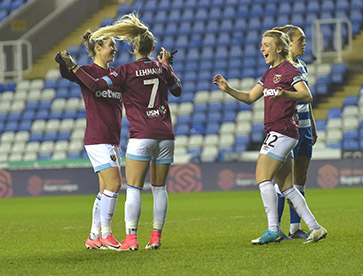 Moments later the Royals had another chance, as Williams shot was deflected and almost reached Brooke Chaplen. However, the Irons goalkeeper was quick off her line to reach the ball first.

Reading started the second half brightly, as they forced Moorhouse in to an early save.

However, on 54 minutes West Ham doubled their lead, as So-Hyun again won the ball high up and played Lehmann through and she fired in to the roof of the net.

Reading pulled a goal back 12 minutes later. Moorhouse went to collect the ball, but the striker was first to it and the referee pointed to the spot. Williams stepped up and she just squeezed it past the reaching glove of Moorhouse.

On 82 minutes Kiernan made a great weaving run to win a free-kick on the edge of the Reading box. Lehmann stepped up to take it, but it went just wide.

Three minutes later Percival played a great corner in to the box which reached Brooke Hendrix as she headed wide.

However, the Irons held on to secure a 2-1 victory and jump above Reading in the Women’s Super League table.