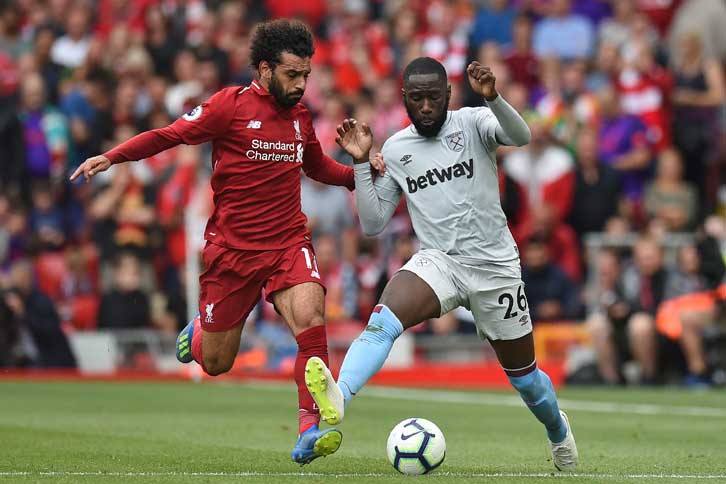 West Ham United suffered a 4-0 defeat at Liverpool in their 2018/19 Premier League opener on Sunday.

The Hammers were unable to stop a potent Liverpool attacking force, who led 2-0 at the break thanks to Mo Salah’s opener and Sadio Mane’s tap-in on the stroke of half-time.

West Ham went close through Marko Arnautovic in the opening period, but Liverpool were in command and made their dominance count with two further strikes after half-time, Mane notching again before Daniel Sturridge completed the scoring.

The Hammers named five of their nine summer signings in the starting line-up at Anfield, with Felipe Anderson involved from the off up front and Lukasz Fabianski getting the nod in goal.

Felipe Anderson had his first chance to run with the ball with just a minute on the clock and he carried the ball forward 30 yards before laying off to Arthur Masuaku, but he couldn’t get the better of Trent Alexander-Arnold.

Liverpool threatened for the first time with eight minutes on the clock, and Salah’s threaded pass to Roberto Firmino inside the box was dangerous, but Michail Antonio tracked back diligently to nick the ball off his toes and knock back to Fabianski.

Liverpool’s ability to attack at pace is well documented, but there was nothing the Hammers could do to stop it on 18 minutes when Naby Keita carried forward and waited for Andy Robertson’s run from full-back before passing into the path.  The Scot crossed low and Salah couldn’t miss from four yards.

Six minutes later, Fabianski had to be at his best to fly to his right and touch Alexander-Arnold’s free-kick behind after Mark Noble fouled Firmino 25 yards out.

At the other end, the Hammers threatened an equaliser and Arnautovic brilliantly controlled from a clipped ball over the top, but with Joe Gomez diving into pressurise him, the shot deflected wide for a corner.

West Ham went close from that too, with Fabian Balbuena having a header saved by Alisson, but Liverpool were the more menacing and Salah looked odds on to make it 2-0 when Firmino got in down the right and crossed low, but Fabianski was there to make a vital block.

However, the Hammers could not reach the interval just a goal down, as Liverpool doubled the advantage in stoppage time. Again, the finishing touch was a simple one from close in, with Mane only having to knock in after he was left free from James Milner’s cut back.

Robert Snodgrass came off the bench for Declan Rice at the break and he was involved immediately, sending over a 49th minute corner which Felipe Anderson flicked on at the near post and Antonio knocked over at the far.

But four minutes later it was game over as Firmino was allowed to carry the ball too far unchecked and he fed the ball through for Mane to swivel inside the area and drill into the bottom left corner.

Replays suggested the flag should have gone up for offside, but it didn’t and Liverpool were home and hosed.

They weren’t content with three, though, and added a fourth two minutes from time, substitute Sturridge turning home a corner from the left with his first touch.