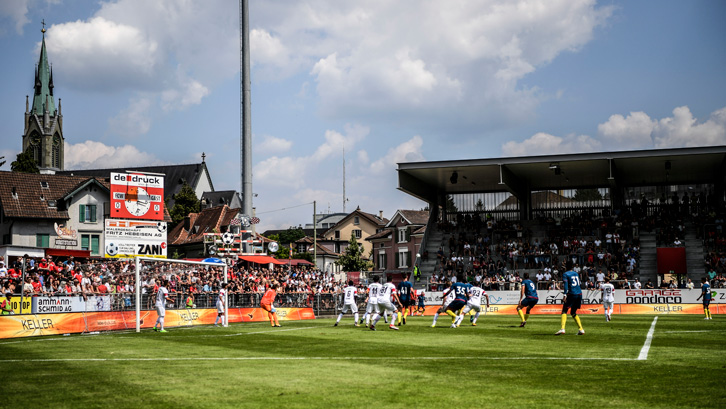 The Hammers, who have spent the week at an intensive training camp in Bad Ragaz, fielded 22 players as Manuel Pellegrini took charge of his newly-inherited squad for the first time.

Andy Carroll and Mark Noble were both on target for the Premier League side, who got valuable match minutes into their legs on a hot and sunny Sunday afternoon at the Stadion Schutzenwiese.

The game hinged on a missed penalty from captain Carroll just before half-time, when the England centre forward saw his spot-kick saved by former West Ham youngster Raphael Spiegel.

It was Winterthur who started the brighter and they could have gone ahead even before they did go ahead, with Luca Radice rattling Adrian’s post before the Spaniard recovered to keep out Sead Hajrovic’s follow-up effort.

It was Davide Calla who put Winterthur ahead on 25 minutes, getting in front of his man to head powerfully into the top corner, much to the delight of the home fans among the sizeable crowd.

West Ham were level eight minutes later when Edimilson Fernandes got to the byline before squeezing a low cross past Spiegel and Carroll slid home from no more than a yard.

An entertaining, even game tipped again in Winterthur’s favour in the minutes before half-time. Striker Manuel Sutter prodded the home side in front, then Spiegel kept his side in front with two fine saves in the space of 60 seconds.

First, the ex-Hammer denied Carroll from the spot after Pablo Zabaleta had been brought down. Then, from the resulting corner, Spiegel plunged low to his right again to push Conor Coventry’s shot to safety.

Pellegrini changed his entire team at half-time, introducing new signings Issa Diop and Ryan Fredericks, but it was Winterthur who scored the game’s fourth goal with 16 minutes remaining.

French forward Jordan Gele, on for Sutter, got in behind the West Ham defence and calmly finished past Nathan Trott to make it 3-1.

There was still time for the Hammers to make the game interesting when Jordan Hugill raced onto a through ball and was brought down by substitute goalkeeper Bojan Milosavljevic. This time Noble made no mistake from 12 yards, sending Milosavljevic the wrong way.

And West Ham so nearly fashioned a dramatic late equaliser when Noble crossed for debutant Diop, only for the giant centre-half to glance his header a yard wide of the far post.

Pellegrini and his squad returned to Bad Ragaz on Sunday evening and will return to the training pitch for three sessions on Monday, further boosting their fitness, strength and conditioning for the Premier League season ahead.