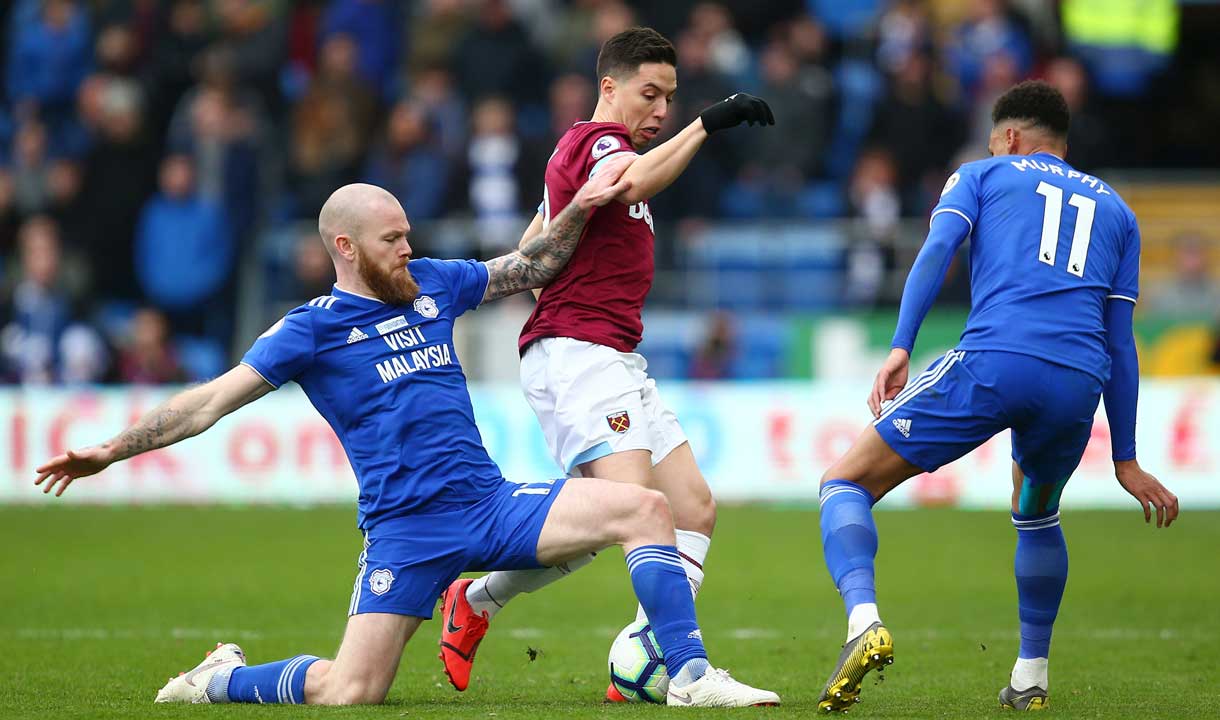 West Ham United fell to a frustrating 2-0 defeat at Cardiff City on Saturday, when a goal at the start of each half kept the points in South Wales.

Junior Hoilett and Victor Camarasa punished some sloppy defending from the visitors to get the goals, which Cardiff proceeded to defend relatively comfortably.

Declan Rice struck the post in the second period, but the Hammers were unable to break down a stubborn home rearguard with regularity and they could have few complaints over the final score.

Manuel Pellegrini named an unchanged side from last weekend’s victory against Newcastle, but his team were slow out of the blocks and fell behind in the fourth minute.

Camarasa drew the Hammers defence in with a run from midfield before playing Josh Murphy clear down the right and his low cross was turned home by Hoilett from close range.

Nine minutes later Hoilett had the opportunity to double the lead when Lukasz Fabianski came out to the edge of his box but failed to gather the ball. Hoilett saw the goal from his angle, but lofted over the top.

The early goal gave Cardiff the luxury of being able to surrender possession to the Hammers and sit behind the ball, but West Ham lacked the tempo needed to break them down.

The closest they came before the break was Robert Snodgrass’ effort from the edge of the box a minute before half-time which flew over the top.

Marko Arnautovic replaced Felipe Anderson at the restart, but again Cardiff were first out of the traps and they made it 2-0 with 52 minutes played.

Hoilett and Murphy combined to lay on the chance, the later nodding the former’s cross back for Camarasa to bundle home at the far post.

Cardiff continued to create opportunities and Oumar Niasse should have scored a third when he raced through on goal on 57 minutes but shot wide with just Fabianski to beat.

Then, the Hammers stopper had to make a fine, instinctive double save to deny Niasse and Camarasa from close in.

It took the Hammers until the 71st minute to seriously threaten, when Declan Rice drove forward from midfield and struck the base of the post with his shot from 20 yards.

Shortly afterwards Neil Etheridge saved Arnautovic’s thumping shot, but the damage had already been done as the Hammers fell to defeat.