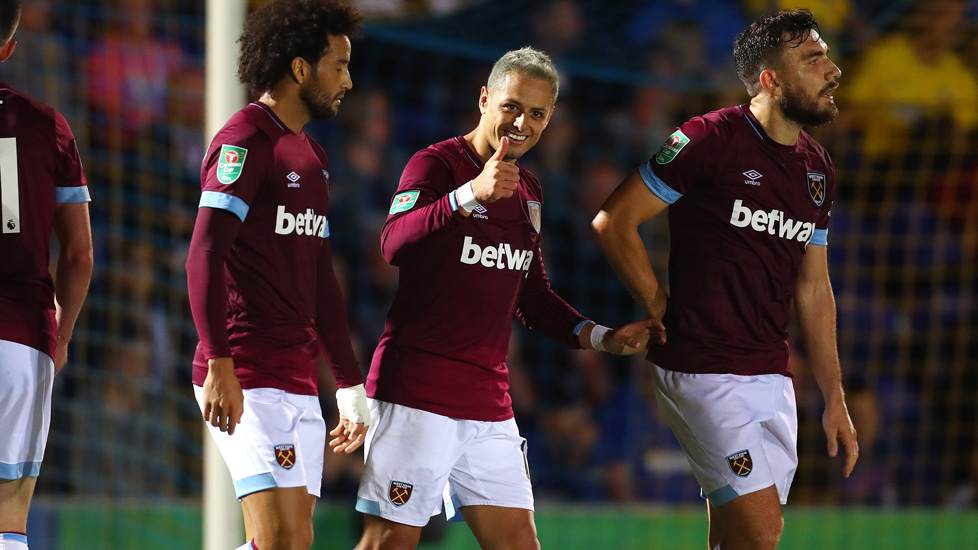 West Ham United came from behind to defeat AFC Wimbledon with three second half goals to book their place in the third round of the Carabao Cup.

The Hammers had to do things the hard way after falling behind to Joe Pigott’s early header, but the League One side’s hopes were harmed by Rod McDonald’s 19th minute dismissal.

West Ham took their time before making their dominance count, eventually levelling just past the hour thanks to Issa Diop’s thunderbolt.

Angelo Ogbonna headed the second seven minutes from time, before Chicharito wrapped it up with a third at the death.

Wimbledon shocked the Hammers by taking a second minute lead through Pigott, who climbed high to meet Mitch Pinnock’s left-wing corner with an unstoppable header.

Falling behind to their League One hosts was not in the script, but the Hammers’ hopes of getting back into the contest were boosted by a couple of quickfire bookings for McDonald.

With 13 minutes on the clock, he felled Robert Snodgrass as the Hammers looked to break to pick up his first, then six minutes later a tug back on Chicharito just outside the area brought a second.

West Ham were already bossing possession, but with an extra man they began to enjoy a near monopoly on the ball, reaching the interval with 351 passes to Wimbledon’s 86.

It would not yield a goal in that opening 45 though, despite the best efforts of Snodgrass and Yarmolenko on the flanks.

The Ukraine winger went closest himself, cutting inside from his wing and curling over the bar with his left foot midway through the half.

Then, three minutes before half time, the visitors’ No20 sent a looping header over goalkeeper Tom King, only for Will Nightingale to clear off the line.ed

Felipe Anderson was introduced from the bench at the break and he looked to make an immediate impact, rippling the side netting with a low drive from the edge of the box.

The Brazilian dug out a left wing cross for Chicharito too, but King was there to grab his flicked header.

A goal was coming, but when it did arrive – with 63 minutes on the clock – it came from an unlikely source.

Little seemed on when Diop received the ball from Felipe Anderson midway inside the Dons’ half, but he took It on, saw the space in front of him and thumped a 25-yard drive beyond King’s left hand.

Two minutes later the Frenchman so nearly added another when Felipe Anderson sent over an inswinging corner from the left and Diop met it, but sent the header crashing against the crossbar.

Wimbledon dug deep, but seven minutes from the end their resistance was broken decisively.

It was the other centre back who popped up with the second, Ogbonna peeling off round the back from a Snodgrass corner to lose his man and head home.

Then, deep into stoppage time, Chicharito added some gloss to the scoreline by collecting Arthur Masuaku’s pass, rounding the goalkeeper and slotting through Nightingale’s legs.