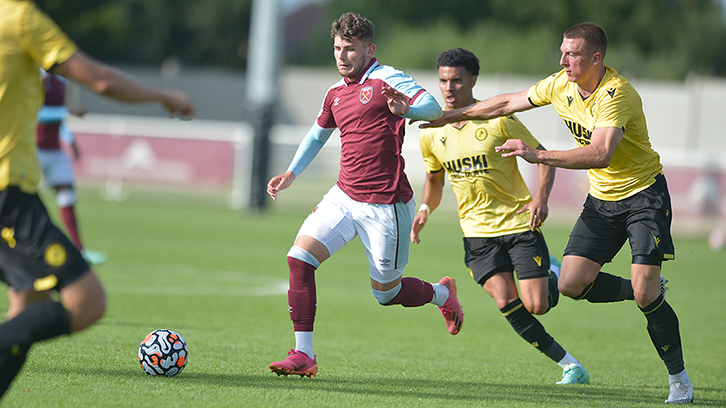 Dan Chesters came off the bench at half-time to inspire West Ham United U23s to a hard-fought win over Millwall U23s in their final pre-season fixture on Monday afternoon.

With a season opener against Arsenal U23s at London Stadium looming next Monday evening, the Hammers toiled in the first half against their local rivals, enjoying plenty of possession without too much end product.

Yet the emergence of Chesters from the bench at half-time sprung the game into life, the attacking midfielder slamming home a near-post finish within moments of coming on.

A clever set-piece routine 15 minutes later involving Chesters saw the midfield tee up Kamarai Swyer to double the Hammers' lead with a volleyed finish, before Millwall set up a nervous last quarter-of-an-hour through Nana Boateng's tap-in.

West Ham's U23s were bolstered by a second pre-season start for Arthur Masuaku, who has been continuing his return to full fitness with the development squad.

But it was the visitors who had the first shot of the match. After West Ham failed to clear their lines, Sean O’Brien carried possession into the area and, trying to catch Krisztian Hegyi out at his near post, ignored his supporting players before crashing a low shot into the side-netting.

A minute later, a strong run down the left flank saw Masuaku win the Hammers a corner which reached Kamarai Swyer at the far post. Having brought the ball down, the attacking midfielder struck at goal from six yards, but found his effort blocked by a crowd of bodies.

Both sides stood firm in the opening exchanges, however, with opportunities in front of goal limited.

In front of another strong support from first-team players and staff – Declan Rice joining teammates Lukasz Fabianski and David Martin in showing his support for his Academy colleagues – it was another first-team representative who showed the first flash of inspiration after 20 minutes.

Outfoxing his marker with a superb flick on the outside, Masuaku raced into the area and pulled the ball back towards the penalty spot. Millwall’s defender deflected it only as far as Armstrong Okoflex six yards out. Unfortunately, the forward’s snapshot deflected, looped up and sailed over the top corner.

Amadou Diallo was next to try his luck at goal after a clever backheel from Odubeko gave him the chance to shoot from 25 yards, but his dipping effort across goal was always bound wide of the mark.

Millwall’s deep line and heavy numbers were proving a challenge to break down, demanding a sharpness of passing which Swyer and Odubeko combined to produce ten minutes later. Cutting into the corner of the box, Odubeko’s effort was ultimately at the right height for Millwall ‘keeper Joe Wright to catch comfortably.

And despite seeing little of the ball, it was the Lions who actually went closest to scoring in the first half when Alfie Allen’s cross took a massive deflection off Swyer, spinning dangerously close to nestling inside Hegyi’s top corner.

Okoflex had a good opportunity to slip Odubeko in on goal when Millwall ‘keeper Wright miscued with his clearance, but the pass was lacking the necessary purchase, before Hegyi needed to be quick off his line at the other end after a long clearance almost reached Boateng running in behind.

Where the Hammers had struggled to get going in the first half, they started the second at a blistering pace.

Twice in the opening two minutes of the half, the team in Claret and Blue worked it well down the right-hand side, Diallo flashing crosses across the face of goal on both occasions.

So when a third attack down the right, culminating in Ossama Ashley's fine pass, arrived into the path of Chesters – who had only been on the pitch for a matter of minutes – it felt warranted that the midfielder should control with a lovely touch and slam a rising finish in at the near post.

The goal sparked the game into life, Millwall’s Jayden Davis and Junior Tiensia combining well down the left before delivering a teasing cross which examined Aji Alese’s defensive mettle – the Hammers’ skipper clearing behind.

From the subsequent corner, Hegyi did well to punch clear under pressure before Odubeko carried the ball from the halfway line on the counter, beating a defender for pace and cutting back onto his left foot. Reaching a central position, the No9’s left-footed effort went narrowly wide of the bottom-left corner.

It was Chesters again who was the root of the Hammers’ second goal. After winning a free-kick 30 yards out, a clever set-piece routine saw Diallo outwit the Millwall defence with a slide-rule pass into Chesters’ path.

In plenty of space, the playmaker opted to play a low cross into the Millwall area which rebounded off the goalkeeper and Jamal Baptiste. Forced out wide, West Ham’s No6 did well to recycle possession to Chesters, who played it back into a threatening area for Swyer to catch a volleyed finish sweetly past Wright.

It could have been a platform for West Ham to kick on, but instead, Millwall seemed spurred on by going two goals behind.

After wasting two good opportunities with poor balls in the final third, the Lions pulled a goal back when substitute Seb Drozd dribbled to the byline and cut it back for Nana Boateng to slam home from close range.

Lead coach Dmitri Halajko introduced his remaining five substitutes for the final 15 minutes to help his team get over the line.

And it was one of those substitutes who made an immediate impact, Emmanuel Longelo bursting into the box before being felled on the touchline. Fellow sub Mesaque Dju stepped up – but struck the base of the post with his effort from 12 yards.

It was enough to regain the Hammers their rhythm as Dju, Chesters and a Trialist played a lovely passing move to release the Portuguese forward down the right channel. His pull-back picked out Odubeko on the penalty spot, but the No9’s effort suffered a double ricochet off a defender and back onto his shooting leg before sailing out for a goal kick.

Longelo then delivered a fizzing corner-kick which Baptiste attacked with his boot, only for Millwall to defend bravely, before the left-back followed up with a stinging strike from a tight angle, beaten away by Wright.

The Lions then had a chance to equalise in the final minute when a Trialist ran onto a long ball over the top, but his finish was wild and well over Hegyi's crossbar.

That looked to be that, until Millwall U23s won a free-kick on the edge of the area in the closing seconds. Sensing a grandstand finish, that same Trialist got to his feet, bent the ball low round the wall, and off the inside of Hegyi's post.

As the rebound reached the Millwall Trialist for a second effort from the edge of the area, the ball deflected off our own Trialist and - after some last-minute pinball inside the area - was cleared, earning the Hammers victory in their pre-season finale.