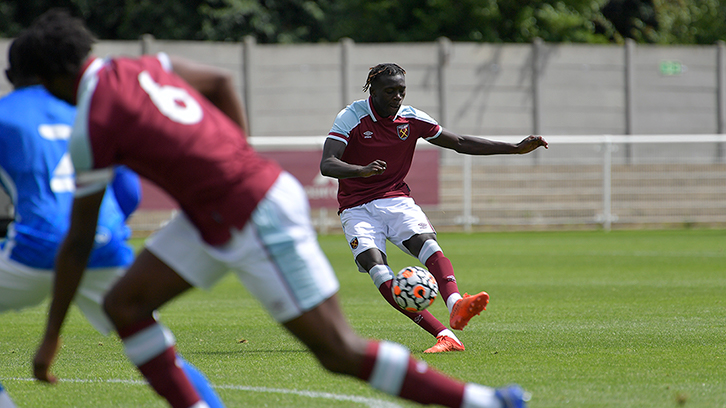 Emmanuel Longelo hit a brace of exquisite free-kicks to set West Ham United U23s on their way to a convincing 3-0 win over Birmingham City U23s on Friday afternoon.

Dmitri Halajko's development squad were in full control of the pre-season fixture throughout and added a third in the latter half courtesy of Bernardo Rosa's well-worked team goal.

But it was Longelo who stole the plaudits initially, twice finding the top corner in the first half with consecutive efforts from set-pieces either side of a missed Birmingham penalty.

Inside the opening seconds, an excellent cross-field pass from Keenan Forson led to Longelo playing in Okoflex down the left flank. The winger, bearing down on goal, appeared caught in two minds as to whether to shoot or cross, allowing the defender back in – following a goalmouth scramble, the danger was cleared.

Longelo had started the game brightly, and within minutes had his first goal of pre-season with a sumptuous free-kick.

With six minutes on the clock, Kamarai Swyer’s quick feet drew the foul 25 yards from goal, and the left-back stepped up and curled the ball high over the wall and into the top corner.

Birmingham responded when sprightly left winger Odin Bailey cut inside and hit a dipping effort from 20 yards, but David Martin got down to beat well clear of the West Ham goal.

Odubeko squandered a clear opportunity to double the Hammers’ lead moments later, unable to place the ball beyond the goalkeeper’s boot after Forson’s high pressing had nicked possession off the last defender.

Bernardo Rosa was the next to go within inches of finding West Ham’s second. After being picked out by Harrison Ashby, Okoflex had an effort blocked to the edge of the area, where Rosa struck first time – narrowly wide of the post.

The young Hammers were firmly in control, and after neat footwork from Okoflex allowed the winger to tee up Swyer inside the area, the playmaker’s side-footed effort struck the base of the Birmingham post.

Okoflex was next to place an effort narrowly wide – as it turned out, from an offside position – before Martin was called into action, fielding a 30-yard laced strike with care.

Yet despite being firmly on the backfoot inside the opening 25 minutes, Birmingham were gifted the chance to equalise from the penalty spot when Longelo was adjudged to have pushed Marcel Oakley inside the box. Odin Bailey stepped up – and thumped the underside of the bar, the ball bouncing clear.

It was to be Longelo’s game. Minutes later, after Swyer was caught on the follow through after intercepting a loose Birmingham pass at the back, the referee whistled for a free-kick, despite Swyer having already squared for the free Odubeko.

As it transpired, that was of no consequence: from the corner of the area, Longelo stepped up and bent another excellent effort over the wall, nestling the ball inside the near post. 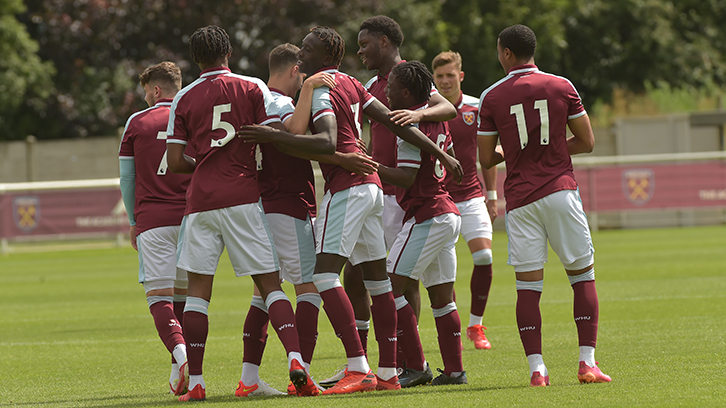 Rosa then combined well with Odubeko and raced away down the inside left channel. Cutting back onto his right foot inside the area, the Brazilian slipped on the surface and his shot skimmed wide.

As the half drew to a close, captain Aji Alese was twice called into action at the back with an immaculately timed tackle and an excellent header from beneath his own bar.

Zohore went one-on-one with Martin moments before the whistle, but the West Ham ‘keeper kept his eye on the ball and – plunging to the Birmingham striker’s feet – made an excellent stop to maintain his clean sheet.

The second half continued in the same manner as the first, with West Ham looking dangerous every time they went forward.

Odubeko thought he’d found space inside the six-yard box, only to have the ball taken off his toe. Picking up the loose clearance, Longelo went for the curling far-post finish – but on his weaker right foot, his effort flew high and wide.

Rosa was the next to run clear after Odubeko’s high press yielded possession, only for his effort to prove too close to the ‘keeper, and Dan Chesters then blazed a shot high of the near-post after carrying possession into the area.

Chances stemmed as the tempo dropped in the second half, with half-time substitute Ossama Ashley being the next to have a shot on target for the Hammers. Excellent combination play between Ashby and Chesters led to the Scotland U21 international pulling back for the midfielder, but Ashley’s finish was at a good height for the Blues’ shot-stopper.

When the third goal did arrive, it was a well-constructed one. Ashley produced an incisive pass to pick out Diallo on the corner of the area, and his exquisite curling cross was met – on the slide – by a stretching Rosa to apply the finish.

Diallo came close to scoring himself after being found by Okoflex's centre, only to be flagged offside, and Mesaque Dju saw one effort roll across the goal-line after rounding the 'keeper before later striking the side-netting.

With both sides ringing the changes, however, the final quarter of the game passed without much by way of incident, save for instances of impressive defending by Ashby, Laing and Longelo - a man who had made his presence felt at both ends of the pitch.