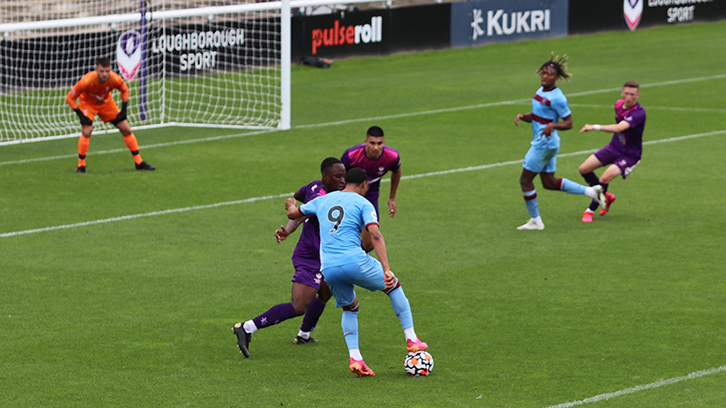 Plenty of fresh faces were on display in Claret and Blue, including numerous U18s players - on their own training camp at Loughborough University - and summer signings Thierry Nevers and Armstrong Oko-Flex, who both started in an exciting attacking trio alongside Amadou Diallo.

Indeed, it was the latter who gave them the lead inside the opening two minutes. Following a season disrupted by injury, Diallo got his 2021/22 off to the best possible start with a surging dribble to beat his marker into the area, striking across goal and low into the bottom corner with precision.

To their credit, the home team responded immediately and, after the Hammers had failed to clear their lines from a corner, only a fine plunging low save from West Ham’s Trialist in goal denied Loughborough’s Cam Moore an immediate equaliser.

But the Irons grew into the contest and began to dominate after being awarded a penalty on the quarter-of-an-hour-mark.

After a spell of controlled possession in and around the Loughborough area, a quick give-and-go on between Oko-Flex and Diallo led to the former having his heels clipped as he prepared to let fly inside the box.

Republic of Ireland youth international Oko-Flex – initially playing through the centre – stepped up and struck a firm, confident penalty, high beyond the reach of the Loughborough goalkeeper, who had guessed the right way but stood little chance of stopping the effort. 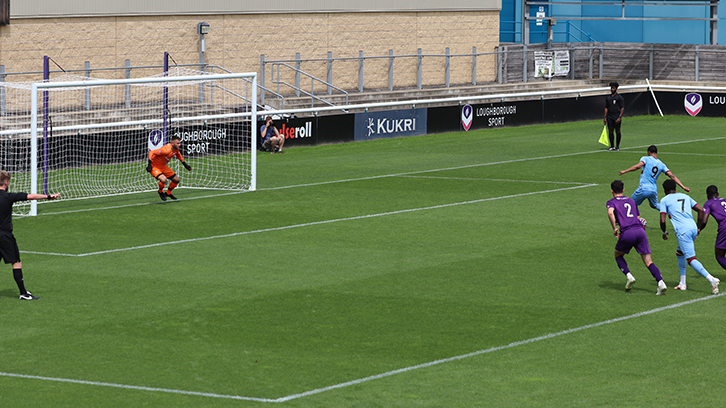 West Ham trebled their lead on 25 minutes. Good work from Diallo and Harrison Ashby down the right flank created clear space for Emmanuel Longelo to shoot from 30 yards. His deflected low strike fell perfectly into the path of Bernardo Rosa who, with time and space, tucked away the opportunity with aplomb.

New U23s professional Levi Laing kept his side’s clean sheet intact with a timely interception moments before the half-time whistle, before Nevers - on the counter - struck the angle of post and crossbar as he looked to convert Longelo’s powerful low cross.

Lead coach Dmitri Halajko made three changes at half-time, and it was two of those substitutes who looked to combine after the restart, but Mesaque Dju – picked out in behind by Dan Chesters’ clipped pass – was caught narrowly offside.

The offside flag then denied Oko-Flex his second of the match after Chesters’ curling shot from Nevers’ lay-off was only parried out to the forward's feet. Oko-Flex tapped home, but the goal was chalked off by the officials.

Loughborough did pull one back on the hour mark when Moore, in an offside position, cleverly allowed a through pass to run in behind, allowing Tongsoung Lee to break in behind and slot the ball home.

A number of U18s players entered the fray and rose to the opportunity, with striker Divin Mubama shaving the crossbar with a rising strike with 20 minutes remaining.

A series of rebounds inside the area then saw Dju’s low shot blocked from close range, but the Portuguese forward's perseverance was almost rewarded when he robbed Loughborough’s goalkeeper of possession moments later. From a narrow angle, however, Dju found only side-netting.

As West Ham continued to mount pressure upon the Loughborough goalmouth, U18s forward Remy Coddington, playing in the unorthodox position of let-back, produced an exquisite curling cross which bounced up just in front of the stretching Mubama and wide of the far post.

And the youth team representatives continued to impress when 16-year-old George Earthy’s fine slide-rule pass granted Dju the time to take a touch and clip the ball over the onrushing ‘keeper, rounding off the afternoon's scoring - and with it, a solid start to pre-season for the collective Academy of Football.