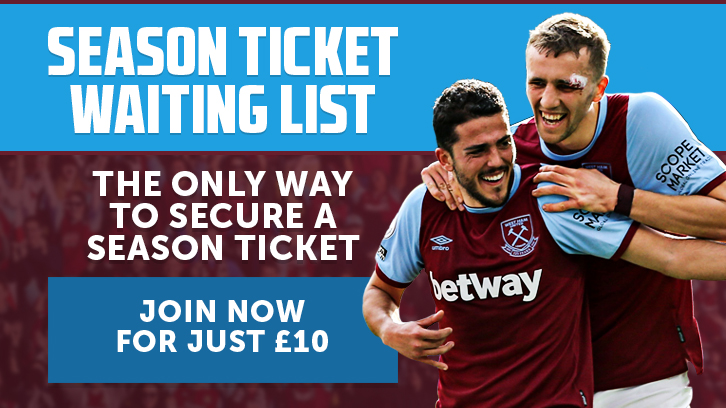 Don't miss out on huge West Ham moments. Put yourself in the best position to watch the Hammers live every week by joining the Season Ticket Waiting List.

It costs just £10 to join, which will be redeemable against your future Season Ticket purchase.

Joining the Waiting List is the only way to secure a Season Ticket – Season Tickets have sold out for last four seasons since our move to London Stadium, including the additional allocation which became available as part of the stadium capacity increase to 60,000 in January, which were immediately snapped up by supporters on the Waiting List.

There are a whole host of benefits to owning a Season Ticket, with huge savings compared to purchasing match-by-match - adults can save over £400 and kids over £500.

You’ll also have exclusive discounts on official merchandise and priority on home cup and away fixtures.

Join the Waiting List now for just £10, and the sooner you join, the better your priority!