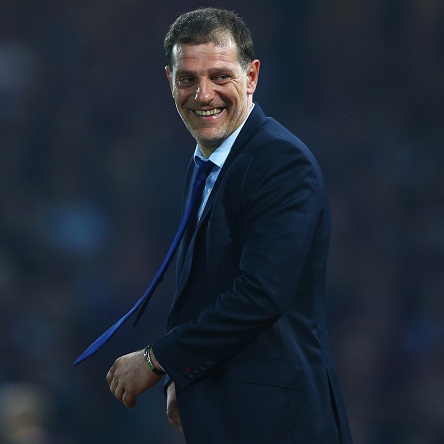 Croatian Slaven Bilić was appointed as West Ham United's 15th permanent manager on 9 June 2015, returning to the Club he played for 54 times during the late 1990s.

Bilić guided West Ham to a seventh-place Premier League finish and UEFA Europa League qualification in his first season in charge, 2015/16, when his team's all-action style thrilled the Claret and Blue Army.

Perhaps Bilić's finest moment of that opening campaign came on 10 May 2016, when goals from Diafra Sakho, Michail Antonio and Winston Reid secured a dramatic, unforgettable 3-2 Premier League win over Manchester United in the final game at the Boleyn Ground.

The following season 2016/17, was more testing for a variety of reasons, but Bilić guided his team to the relative comfort of eleventh place in the Premier League.

As a player, Bilić was an outstanding centre-back during a 14-year career that saw him represent Croatian giants Hajduk Split, German side Karlsruher SC, West Ham and Everton.

A promising prospect as a youngster, he joined Hadjuk at the age of nine, being loaned to lower-league sides Primorac and Sibenik before making his senior debut for his hometown club at the age of 20 in 1988. He later won the Yugoslav Cup in 1991, the inaugural Croatian League title the following year and Croatian Cup in 1993.

A big-money move to Germany resulted and Bilić was named Karlsruher captain, leading the Eurofighters to the UEFA Cup semi-finals in his first season with the club.

In January 1996, Bilić moved to east London and quickly established himself in the entertaining West Ham team of the time, playing alongside the likes of John Hartson, Frank Lampard, Eyal Berkovic and close friend Steve Potts.

After helping the Hammers to finish eighth in the Premier League in 1997/98, he joined Everton before finishing his career with first club Hajduk in 2001.

At international level, the defender was part of Croatia’s golden generation of the 1990s, helping The Blazers to reach the UEFA Euro 1996 quarter-finals before finishing third at the 1998 FIFA World Cup, playing alongside the likes of fellow former Hammers Igor Stimac and Davor Suker.

Bilić returned to the international stage in 2006, embarking on a headline-making seven-year spell as manager of Croatia. During his tenure, the Balkan nation denied England a place at Euro 2008 with a famous 3-2 win at Wembley, before going on to top their group with victories over Germany, Poland and host nation Austria.

Only a penalty shootout defeat by Turkey denied Croatia a place in the Euro 2008 semi-finals and Bilić rallied his fellow countrymen to come within a whisker of qualifying for the 2010 World Cup finals.

Two years later, Bilić ended his tenure as Croatia manager by leading his national side to Euro 2012, finishing with an outstanding record of 42 wins and just eight defeats from 65 matches in charge.

On his return to club management, Bilić spent a year with Russian Premier League side Lokomotiv Moscow before taking up the challenge of managing Besiktas in the competitive and passionate Turkish Super Lig.

There, he took the Istanbul-based club to consecutive third-place finishes, winning 48 of his 92 games in charge and leading them to the UEFA Champions League Play-Off round and the UEFA Europa League Round of 16, beating Tottenham Hotspur and Liverpool along the way.