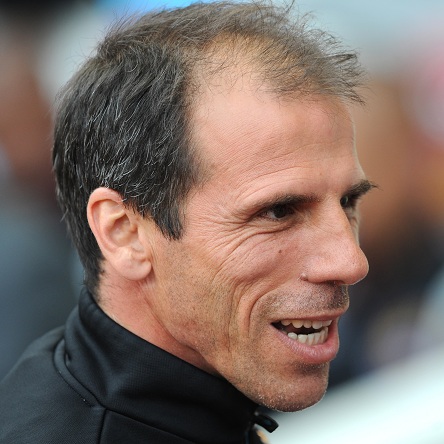 The former Napoli, Parma and Chelsea forward enjoyed a fabulous playing career, winning eleven trophies, being voted Footballer of the Year in 2007 and earning 35 caps for his country.
Zola quickly became a popular figure among the supporters for both his amiable character and the flair with which his teams initially played.

With Scott Parker excelling in central midfield and Carlton Cole rejuvenated in attack, the Hammers played with verve and style in Zola’s first season at the Boleyn Ground, finishing just two points adrift of European qualification.

Unfortunately, the 2009/10 season did not go so well, with the Hammers winning just eight Premier League matches to finish 17th in the table with 35 points. Zola departed his role in May 2010.

After leaving the Hammers, the Italian spent 18 months in charge of Championship side Watford and was appointed manager of Italian side Cagliari on his home island of Sardinia in December 2014.