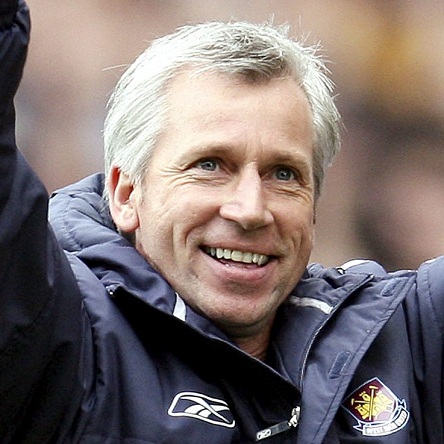 Alan Pardew enjoyed a successful three years in charge of West Ham United between 2003 and 2006.

A late bloomer as a player, Pardew worked as a glazier during his early career as a non-league player with Whyteleafe, Epson and Ewell, Corinthian Casuals, Dulwich Hamlet and Yeovil Town in the 1980s.

In 1987, he was signed for just £7,500 by Division Two club Crystal Palace. A midfielder, Pardew helped the Eagles gain promotion to the top flight in 1989 before writing his name into Palace folklore by scoring a late winner in the 1990 FA Cup semi-finals against Liverpool.

In 1991, Pardew moved to Charlton Athletic, spending four seasons with the Addicks before completing his career with a loan move to Tottenham Hotspur and spells with Barnet and Reading in the late 1990s.

As a manager, Pardew began his career as caretaker boss at Reading in 1998, before being appointed as full-time boss the following year. After narrowly missing out on promotion to Division One in 2001, the Royals gained automatic promotion the following season, 2001/02.

Despite losing out to Wolverhampton Wanderers in the Division One Play-Offs in 2002/03, Pardew’s stock continued to rise and he was approached by West Ham United following Glenn Roeder’s sacking in the autumn of 2003.

Pardew resigned from his role at Reading and, after a short period, agreement was reached and he became West Ham manager in October 2003.

His first season in charge at the Boleyn Ground ended in the agony of a Division One Play-Off final defeat by Crystal Palace in Cardiff.

The Hammers started the 2004/05 season in indifferent form, but sneaked into the Play-Offs and won promotion back to the Premier League via Bobby Zamora’s Millennium Stadium winner against Preston North End.

With the likes of youngsters Matty Etherington, Nigel Reo-Coker, Anton Ferdinand, Bobby Zamora and Marlon Harewood complemented by the experience of Shaka Hislop, Tomas Repka, Teddy Sheringham, Christian Dailly and Steve Lomas, West Ham had one of their most exciting and hard-working sides in some years.

The 2005/06 season was a memorable one for Pardew and everyone associated with the Club. With new signings such as Carlton Cole, Danny Gabbidon, Yossi Benayoun and Dean Ashton to the fore, the Hammers not only finished ninth in the Premier League but reached the Club’s fifth FA Cup final.

Back in Cardiff for the third consecutive season, the Hammers pushed Liverpool all the way, leading 2-0 and 3-2 before losing on penalties.

The summer of 2006 saw the Club bring in Argentina internationals Carlos Tevez and Javier Mascherano, but Pardew did not successfully integrate the South Americans into his side.

Sadly for the manager, he was unable to galvanise his team at the start of the 2006/07 season. A poor run of results, including a shock League Cup defeat at Chesterfield, saw the manager sacked by the Club’s new Icelandic owners in early December following a 4-0 Premier League defeat at Bolton Wanderers.