The Club have played at five stadia during the Club's long and illustrious history.

Thames Ironworks FC started life at Hermit Road in Canning Town in 1895 before moving to Browning Road in East Ham in March 1897.

While a number of players had left, the Club moved effectively to fill the gaps in the squad. Henry Hird, a ship’s plater who had recently arrived at the company from Stockton on Tees, joined. The Hammers also signed several players with experience of playing football at a higher level, including Jimmy Reid and Robert Hounsell (both Reading), Simon Chisholm (Inverness) and Percy Mills (Gravesend).

The Sportsmen forecast on 3 September 1897 that Thames Ironworks could expect a productive season: “It is only reasonable to expect an establishment that employs nearly 5,000 people to turn out a very good team of footballers. The Thames Ironworks opened their season yesterday at the Memorial Recreation Grounds. During the past few months some very capable players have found employment in the Works and as a result a very creditable exposition of the game was seen."

The Thames Ironworks Gazette commented that the new strip: “The contrast supplied by the delightful green turf is very pleasing.”

One newspaper reporter commented: “A prettier and more distinctive costume than theirs I have never yet seen on a football ground. Light blue shirts, white knickers and scarlet stockings were their colours.” 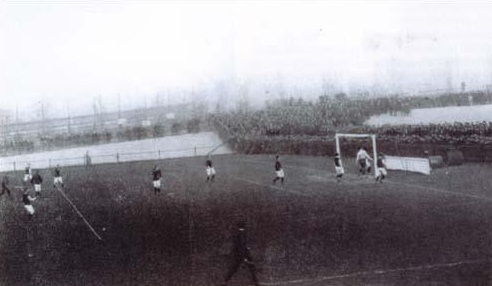 The Hammers take on Plymouth Argyle in 1904

Thames Ironworks FC’s first competitive match at the Memorial Grounds took place on 11 September 1897, when Brentford were the visitors for a London League fixture. A curious crowd of 1,000 spectators turned out to see outside left Jimmy Reid – one of four debutants – score the only goal of the game in 1-0 home victory.

The low attendance was put down to the lack of public transport to help supporters access the site, so Hills decided to take matters into his own hands.

On 13 December 1897 the club secretary wrote: "The support we have received has not been so large as we should wish for, the gates not totalling near the number we might expect and certainly not so many as the quality of the play of our men should warrant."

When West Ham were promoted to the Southern League First Division for the 1899/00 season, ticket prices rose again, with predictable consequences. Crowds were generally disappointing, although 13,000 did turn out for an FA Cup tie with local rivals Millwall, while 12,000 were present for a league defeat by the same opposition.