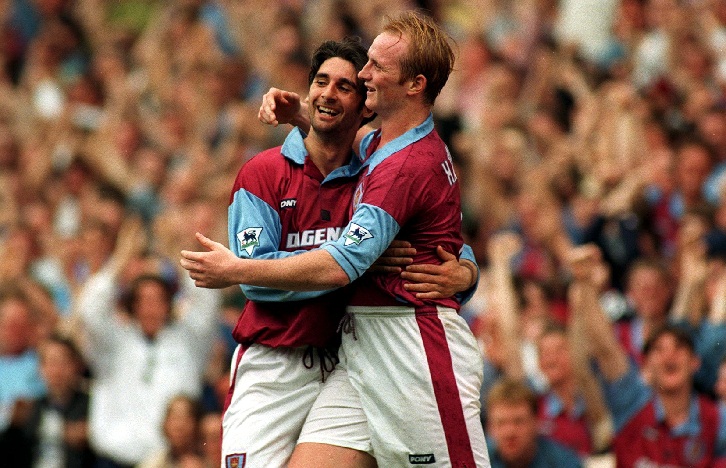 The 1990s heralded a new era in English football, with the formation of the new Premier League in 1992.

Unfortunately for West Ham United, the Club were in the second tier of English football when the restructuring came about.

The new decade began with the resignation of manager Lou Macari after just seven months in charge, with four-times Hammer of the Year Billy Bonds returning to the Club to replace him.

Bonds led West Ham to promotion and an FA Cup semi-final, where they were controversially beaten by Nottingham Forest, in his first full season in charge.

However, the Hammers would slump to bottom in the table and be relegated after just a single year back in Division One in 1992. To compound a difficult campaign, the Club also had issues off the field following the introduction of the unpopular Bond Scheme, which was formed with a view to paying to turn the Boleyn Ground into an all-seater stadium in light of the Taylor Report.

With strikers Trevor Morley and Clive Allen, as well as penalty-taking left-back Julian Dicks, banging in the goals, West Ham won automatic promotion on goal difference to take their place in the Premier League in 1993.

The former Hammers winger embarked on a tumultuous seven-year reign that saw the whole face of the Club change, both on and off the pitch

A year later, in August 1994, Bonds departed and was replaced by his long-time assistant Harry Redknapp.

The former Hammers winger embarked on a tumultuous seven-year reign that saw the whole face of the Club change, both on and off the pitch.

Redknapp used his scouting network to bring in a succession of overseas stars from all over the world, with a varying degree of success. Italian forward Paolo Di Canio became a Hammers legend, while Cameroon midfielder Marc-Vivien Foe, Croatia pair Igor Stimac and Slaven Bilic and Israel playmaker Eyal Berkovic all made their mark, but Romania internationals Florin Raducioiu and Ilie Dumitrescu and Portugal forward Paulo Futre were among the many less fruitful signings.

At the same time, the Academy of Football enjoyed arguably its most positive period since the 1960s, with the likes of future England internationals Rio Ferdinand, Frank Lampard, Joe Cole and Michael Carrick all coming through the ranks under the watchful eye of Tony Carr.

The mid-1990s also saw big changes start to take place at the Boleyn Ground, where three of the four stands were redeveloped. The South Bank was rebuilt as the Bobby Moore Stand and opened in 1993, with the old North Bank redeveloped as the Centenary – and later Sir Trevor Brooking – Stand two years later. The alterations were completed when the new West Stand, seating 15,000 spectators, opened in 2001.

As the 1990s wore on, West Ham’s fortunes gradually improved, with a stirring escape from relegation in 1997, an eighth-place finish in 1998 and a Premier League record fifth place in 1999 – despite the team ending the campaign with a goal difference of minus-seven!

Later that summer, West Ham beat French club Metz to win the UEFA Intertoto Cup and qualify for European competition for the first time since 1980/81. After thrashing Croatian side Osijek, unfortunately Romanian outfit Steaua Bucharest proved too strong in the second round.

While the Hammers’ European dreams might have been shattered, Redknapp’s exciting, cosmopolitan squad were playing some truly entertaining football at both ends of the pitch.