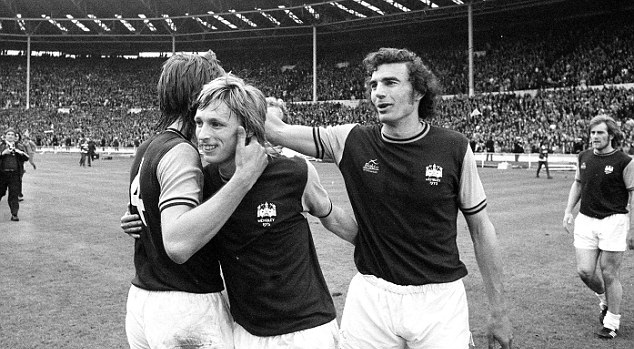 Having broken their major trophy duck in dramatic fashion during the 1960s, West Ham United continued their success in the next decade.

While there was a changing of the guard player-wise, with Martin Peters, Geoff Hurst and finally Bobby Moore all departing during the first half of the 1970s, a new generation of stars did their very best to emulate their illustrious predecessors.

Billy Bonds, Trevor Brooking, Frank Lampard, Clyde Best, Pat Holland and John McDowell had all made their debuts in the late 1960s, but came of age during the 1970s, while the likes of Tommy Taylor, Billy Jennings, Alan Taylor, Graham Paddon and Bryan ‘Pop’ Robson all played influential roles.

Despite the undoubted talent in the West Ham squad, the decade did not start particularly well for the Hammers, who diced with relegation from the First Division in both 1969/70 and 1970/71.

The signing of Robson helped West Ham enjoy a more productive 1972/73 season, with the Sunderland-born striker bagging 28 league goals as Ron Greenwood’s side matched the Club’s record-high finish of sixth.

The following year, 1974, saw two Hammers icons depart the roles that had etched their places in West Ham history – Moore joined Fulham, while Greenwood moved upstairs to take on a new role as general manager, with John Lyall taking over as first-team manager.

Frank Lampard captained the Hammers in the 1975 Anglo-Italian Cup final defeat by Fiorentina
Moore’s departure after 16 seasons at the heart of the defence naturally left a massive hole, both figuratively and literally.

Fourteen months on, West Ham faced Moore’s Fulham in the 1975 FA Cup final at Wembley. An emotional occasion was settled 2-0 in the Hammers’ favour by two goals from unheralded 21-year-old centre forward Taylor, who had joined the Club from Fourth Division Rochdale for just £40,000.

West Ham’s second FA Cup triumph saw the Club compete in the European Cup Winners’ Cup for a second time, and they came within a whisker of emulating their achievement of 1965.

Lyall’s men defeated opponents from Finland and the Soviet Union before defeating Dutch Cup winners Den Haag and West German side Eintracht Frankfurt on aggregate, with the home legs of both ties considered to be all-time classics. The final paired West Ham with Belgian giants Anderlecht, who proved too strong on home turf in Brussels.

Relegation had been narrowly avoided in both 1976 and 1977, but it proved third time unlucky as a final-day home defeat by Liverpool on 29 April 1978 sent Lyall’s men down.

And so the 1970s came to a close with West Ham battling hard to regain their seat at English football's top table.

Lyall had kept the vast majority of his squad together, including a number of England internationals, while the world record signing of goalkeeper Phil Parkes from Queens Park Rangers was another sign that the Hammers still had lofty ambitions.

The 1980s would be the decade when many of those ambitions were fulfilled.