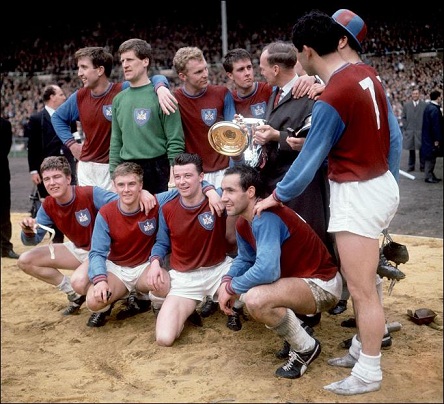 If the Academy of Football was born in the 1950s, then the 1960s was the decade during which it came of age.

The most-successful period in West Ham United’s history saw the Club win the FA Cup, the European Cup Winners’ Cup and, so say many, the FIFA World Cup.

While West Ham never came close to winning the Football League title, the team and its visionary managers, Ted Fenton and then Ron Greenwood, earned rave reviews at home and abroad for their innovative approach to the beautiful game.

On their day, West Ham were capable of beating anyone, as was evidenced by the series of eye-catching victories they achieved over England’s top sides. From front to back, back to front, the Hammers were blessed with elegant ball-players who could tear any opponent apart.

When those Academy combined with the likes of goalkeeper Jim Standen and forwards Johnny Byrne and Alan Sealey, the Hammers could play football of a style rarely seen and rarely matched, on these shores, at least.

West Ham’s first major trophy arrived in 1964, when Greenwood guided his side through a tricky FA Cup run to a Wembley showdown with Second Division Preston North End. As was the nature of       The West Ham Way, it came as no surprise that the final itself was a rollercoaster affair settled 3-2 in the Hammers’ favour by Boyce’s late header.

The following season, 1964/65, West Ham swept aside all before them in the European Cup Winners’ Cup, scoring a notable semi-final victory over Spanish Cup winners Real Zaragoza before defeating West Germans TSV 1860 Munich 2-0 in a thrilling final at Wembley.

That game, described by many commentators as one of the finest football matches of all-time, was settled by two second-half goals from Sealey.

To cap a memorable hat-trick, Moore, Hurst and Peters returned to the national stadium for a third summer in succession in 1966, with each playing an influential role in England’s 1966 FIFA World Cup success. Moore captained the side, while centre forward Hurst bagged a hat-trick and young midfielder Peters scored in the 4-2 win over West Germany in the final on 30 July 1966.

That same year, the Hammers reached the League Cup final for the first time, only to be edged out 5-3 on aggregate by West Bromwich Albion.

West Ham may not have added to their trophy haul during the closing years of the 1960s, but the Club continued to set trends with their evolutionary approach to the sport – on and off the pitch.

Hurst scored an outstanding 41 goals in 1966/67 as West Ham reached the League Cup semi-finals, only for West Brom to again foil them.

The late 1960s saw Greenwood set about developing a new group of players who would come into their pomp during the following decade. This group included the likes of Billy Bonds, Trevor Brooking, Frank Lampard and Clyde Best.

Off the pitch, 1969 saw the redevelopment of the East Stand at the Boleyn Ground – previously known as ‘The Chicken Run’, the old wooden terrace surrounded in part by chicken wire which was knocked down to make way for the new stand.